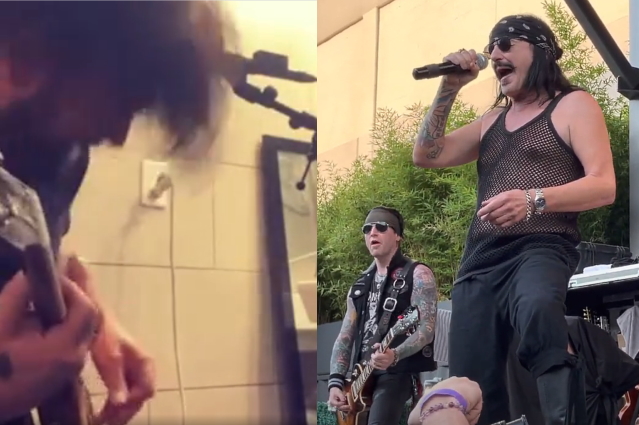 The 56-year-old guitarist explained the "unique situation" in a social media post prior to the gig. He wrote: "A lot of people know I have a panic disorder. While I have it 95 percent under control, Heat is the remaining trigger and I simply cannot play in the heat. BUT!!! We have found a solution for todays show I will be playing in a comfy bathroom directly behind the stage where there is air conditioning. I will do an Instagram live stream during the set if y'all really need to watch me play. I apologize for my crazy brain."

For the concert, L.A. GUNS roadies ran cables to the nearby bathroom where Guns set audio equipment up so he could listen to, and perform with, his bandmates onstage.

L.A. GUNS bassist Johnny Martin came up with the idea to have Tracii play from the bathroom, explaining in a social media post: "Tracii wasn't gonna play the show at all. Because his anxiety is still pretty prevalent. He said to me that he wasn't going to do the show, because the heat was just too unbearable to his condition. And that we'll just have Ace [Von Johnson, L.A. GUNS' other guitarist] cover his parts. So, basically, us play as a four piece. I proposed that we find an air conditioned spot near the stage. And … VOILA! … Here we are. Much better than him opting out, all together. I'M A F**KING GENIUS!"

L.A. GUNS is currently on the road the U.S. with Tom Keifer and FASTER PUSSYCAT as part of the "Sonic Slam 2022" tour.

L.A. GUNS' latest album, "Checkered Past", was released last November via Frontiers Music Srl. The effort marked L.A. GUNS' third album since the 2016 reunion of the band's core members Guns and singer Phil Lewis. It followed 2017's "The Missing Peace" and 2019's "The Devil You Know".

L.A. GUNS was formed in 1983 and have sold over six million records, including 1988's "L.A. Guns" and 1990's "Cocked And Loaded", both of which were certified gold. "Cocked And Loaded" contained the hit single "The Ballad Of Jayne" that went to No. 33 on Billboard's Hot 100 and No. 25 on the Mainstream Rock charts. From the mid-'90s to the mid 2000s, L.A. GUNS continued to tour and release new music. Following their successful performance at SiriusXM's Hair Nation festival in September 2016, L.A. GUNS went into the studio to record the critically acclaimed "The Missing Peace", which was the highest-selling release for Frontiers Music Srl in 2017. Their 12th album, "The Devil You Know", was released in 2019 to the same critical acclaim.