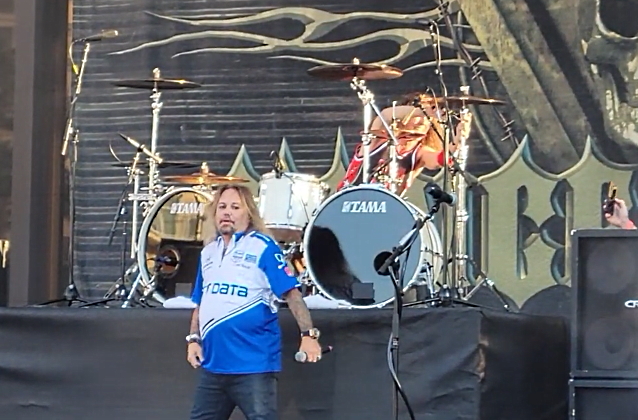 The show took place at approximately 5:30 p.m. on the plaza in front of the Long Beach Performing Arts Center adjacent to the Long Beach Convention Center and was free to Saturday race ticket holders. Space at the plaza was limited and was made available on a first-come, first-serve basis.

When Neil's participation in the event was first announced, he said in a statement: "I am very excited to be returning to perform at the Grand Prix of Long Beach. I had an awesome experience last time in 2015 and I’m honored to be invited back. As it is well known to many, I have been involved in the racing world my whole life. So when you mix racing and rock and roll into one event, I'm in heaven! My band and I are looking forward to an energetic and exciting show performing all the hits. I am certain a good time will be had by all. See you there!"

Last month, Vince revealed that he was trying out a new toning machine in an apparent effort to get in shape for MÖTLEY CRÜE's upcoming "The Stadium Tour". The singer said he was using Emsculpt Neo, a revolutionary new treatment which supposedly builds muscle and reduces fat using both radio frequency and high-intensity electromagnetic energies.

Four months ago, Neil made headlines when he struggled to complete his solo concert at the Boone Iowa River Valley Festival in Boone. Based on fan-filmed video footage of the May 29 gig posted on YouTube, the 60-year-old rocker, who hadn't performed in more than a year and a half due to the COVID-19 pandemic, began losing his voice several songs into his set, which consisted exclusively of CRÜE classics and cover songs previously recorded by the band.