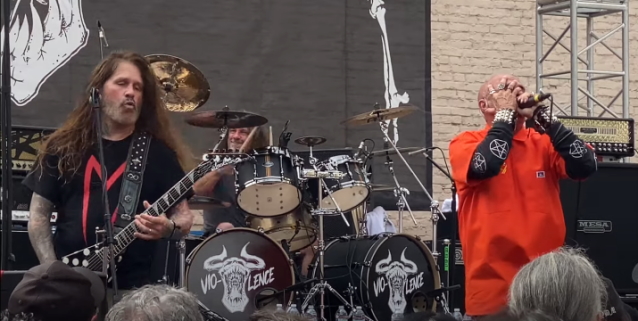 San Francisco Bay Area thrash metal veterans VIO-LENCE played a special afternoon concert outside of Oakland Metro Operahouse in Oakland, California on Sunday, June 5. Video of the performance can be seen below (courtesy of Iron Serbian).

"I'd like to do another EP rather than an album, and we're working on the songs for it already, and hopefully we'll get in to record by next fall," Phil said. "We want to constantly be releasing music, and constantly doing shows. At this stage, we're excited for everybody who's still excited for this band. To them, I say thank you for still listening to and supporting us. We're excited to come play, so spread the VIO-LENCE."

Regarding how "Let The World Burn" recaptures VIO-LENCE's classic sound, Demmel said: "That came very naturally. I hadn't written a lot of thrash in the past 17 years or so, but being the main songwriter for the band over the years, I wanted that sound, I wanted that mid-'80s raw thing, but I also wanted to capture our signature notes and structures and stuff like that." Vocalist Sean Killian elaborated: "Each song has its own individual sound. They are all very thrash metal, there are grinding riffs, technical riffs, and plenty of speed. The lyrics are written freely with no restrictions and without compromise while the vocal patterns are typically unusual and delivered with a multitude of emotions."

Initially the plan was just to play a single show, as a thank you from Killian to those who had supported him through an extended illness that culminated in a liver transplant, giving him back his life.

"From the time I woke up from my liver transplant surgery, the one thing I kept thinking about was repaying everyone that supported me during my illness," Killian said. "Phil put together a charity golf tournament that raised a substantial amount of money that helped cover medical bills, and that event saved my family's lives from being negatively impacted by my illness, plus there was a benefit show which so many musical legends participated in. Fans selling out the venue for that show is something that could never be repaid except with the same passion and affinity, which playing live could enable me to give, and when I heard the news that Phil had left MACHINE HEAD and was available, I thought this was the moment for the return of VIO-LENCE. I sent the man a text that said 'Let's do a show.'"

With that show at The Metro selling out a thousand tickets in a few hours, VIO-LENCE announced a matinee show for the following day, which sold out just as quickly, making it clear that there was still a virulent hunger for VIO-LENCE and their unique take on killer thrash. "We figured, 'Holy crap, it's time to bring it," Demmel said. "It was just like the old days, it was just like 1986 again with people flying around, the energy and the reciprocation and the stage diving, and the horrible PA sound. It was fun. We got Gary Holt [of SLAYER and EXODUS] up to play a song. All in all, the reunion shows were amazing."

At that stage, the prospect of new music was not on the table, with the VIO-LENCE bandmembers instead just figuring out if they could get along, how the dynamic was going to work, if the chemistry for writing together even existed. However, tour offers were coming in and they jumped on several opportunities, Demmel referencing a show with SACRED REICH at The Regent in Los Angeles as the craziest they ever played, and having his mind blown that people were still going as crazy for the band all these years later. It was around that time that he and Killian started talking about the prospect of writing new material, concluding they were more disposed to making an EP.

"I didn't want to do a full-length," Demmel explained. "I figured three maybe four, and we settled on five tunes that could really encapsulate what we were doing. I went to Metal Blade and spoke with Brian Slagel, saying we wanted to do this with them. We weren't shopping labels, we weren't looking for a bidding war or anything like that; we just wanted to do a record with them, and they were all into it."

The sessions went smoothly, with Demmel tracking his solos at home. "It was nice to be able to play things fifty times," he said. "I wanted to play all the solos single pass, which is something that I hadn't done for a while. Everything had been kinda punched in and chopped up, so it's not all fluid, and these ones might not be first pass but they're one pass. I want to be able to play them the way they're supposed to be played, and I'm really proud of them."

"Bobby brings experience, he brings song structure, he knows how song structure works and riffs work, and he has ideas," Demmel said. "He's got an East Coast mentality. He was in a legendary band and he brings a new flavor, plus he's a solid dude, an awesome human. Christian is just a monster bass player. He has great musical sense and song structure sense. He recorded our cover of 'California Über Alles' in our jam room, and he just brings a real pedigree. He's a great dude and an awesome musician, a great package."

With Demmel acting as primary songwriter, the plan was to make something brutal and bludgeoning, a true thrash record, where the band were at when they wrote "Eternal Nightmare" in 1987. Each of the five songs is different to the last while remaining true to this remit, with "every beat, riff and note accounted for," opener "Flesh And Bone" setting the scene and making it clear just how ruthless the band are in 2022. Then there's "Screaming Always", which is classic "Eternal Nightmare"-esque VIO-LENCE, and the likes of the shorter "Gato Negro", which though briefer still has a lot going on, and packs a solid punch. Both guitarists contribute solos to the songs, and there are a lot of harmonies, the two working well together. Lyrics as always come courtesy of Killian, who skews toward the darker side of existence.

"When I write lyrics I try to get as dark and horrible as I can," Sean said. "Then I make changes and minor adjustments with words to bring the lyrics from pure evil to an emotional, painful suffering experience with the pure evil working to support it all. I want people to read the lyrics and create a picture in their mind that they wouldn't normally envision, I want them to create that visual art in their head. The goal is for that artwork that they created to stay with them, registered in their memories, and to be brought forward occasionally to enjoy, letting them pull that record out for decades to come."

VIO-LENCE's last full-length album, "Nothing To Gain", was recorded in August 1990, but wasn't released until 1993. 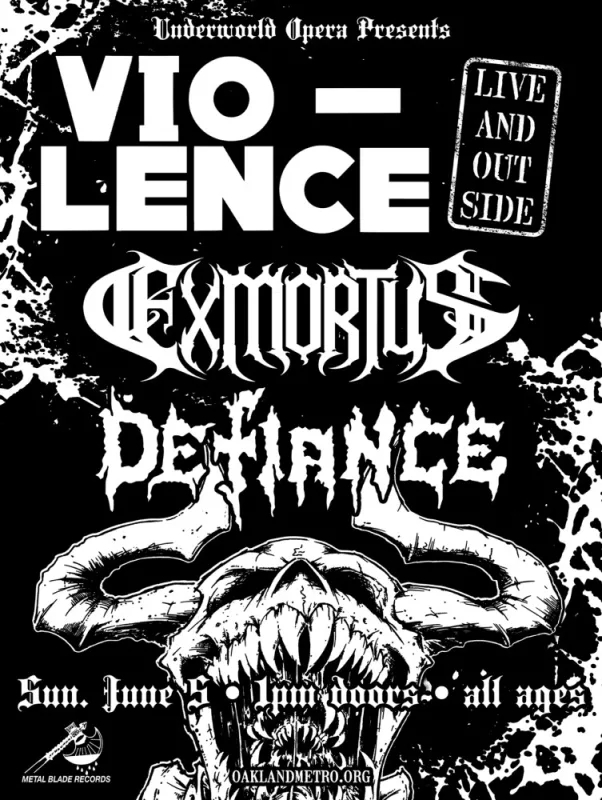