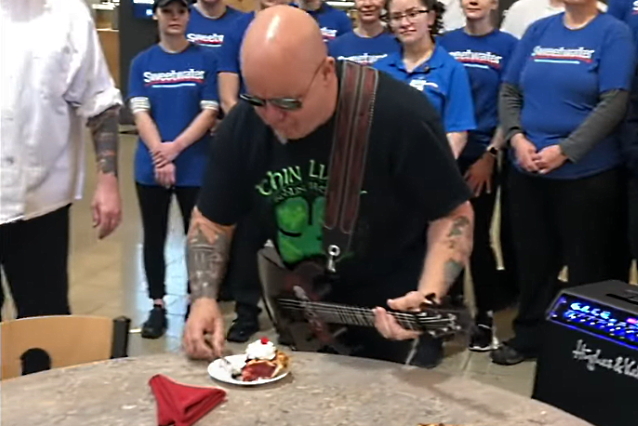 A short video of WARRANT guitarist Joey Allen trying sweet cherry pie at the Sweetwater headquarters in Fort Wayne, Indiana can be seen below.

Back in 2018, WARRANT guitarist Erik Turner told Green Bay, Wisconsin radio station 94.3 Jack FM that he never gets tired of performing some of the band's biggest hits, like "Cherry Pie" and "Heaven". "We always play it in a different place, [in front of] different people," he said. "If there's a lot of people there having a good time and you're having a couple of beers, it never, ever gets old watching people sing your songs and lyrics and scream and shout when you're done playing that song ['Cherry Pie']. Now, that said, if we rehearsed a lot, it would not be fun to play those songs in the room by ourselves — no, absolutely not. But you put yourself in that atmosphere and you get a response to, say, 'Down Boys' or 'Uncle Tom's Cabin', 'Sometimes She Cries'… we've got a bunch of songs… 'I Saw Red' and 'Cherry Pie' and stuff like that. So it never gets old, no."

During an interview that aired in May 2006 as part of VH1's "Heavy: The Story of Metal" four-part documentary tracing the evolution of heavy metal music and culture, original WARRANT singer Jani Lane stated about "Cherry Pie", "I hate that song. I had no intention of writing that song. The record was done. The record was called 'Uncle Tom's Cabin'. And Donny Inner [president of Columbia Records] called up and said, 'I don't hear the single. You gotta give me a fucking single like 'Love in an Elevator'. I need something like that.' So that night I wrote 'Cherry Pie'. Sent it to him. He lived with it over the weekend. Then all of a sudden the album's called 'Cherry Pie'. The record's called 'Cherry Pie'. I'm doing cherry-pie-eating contests. The single's 'Cherry Pie'. Right? If I'm lying, I'm dying. And my legacy's 'Cherry Pie'. Everything about me is 'Cherry Pie'. I'm the 'Cherry Pie' guy. I could shoot myself in the fucking head for writing that song."

Speaking to the "Taz at Night" show on Kalamazoo's 92.5 WZUU radio station in November 2007, Lani dismissed his "Heavy: The Story of Metal" comments, claiming, "They [VH1 producers] just caught me on a bad day. It was a bad moment — I was going through a divorce, my mom had just passed away, all this stuff was going on — and they sit me down in a chair and wanna start grilling me with questions, and I didn't wanna be there, so… You know, push that interview to the side, I'm happy as a clam to have written a song that is still being played and still dug by so many people. It's hard enough to write a song, let alone one that sticks around."

Lane recorded several albums with WARRANT in late 1980s and early 1990s but left the group several times. The band's seventh studio LP, "Born Again", was released in 2006 and featured Jaime St. James as the lead singer. In 2008, Lane returned to WARRANT temporarily and toured with the group. In September that year, WARRANT announced that Jani had left again. The band replaced him with Robert Mason.