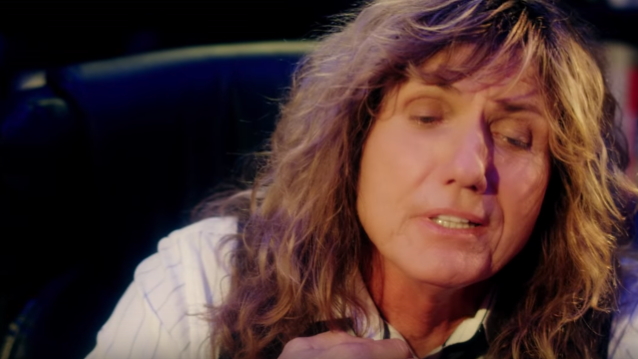 WHITESNAKE has released an official music video for the song "Sail Away", taken from the band's 2015 album, "The Purple Album". The effort was billed as "a re-imagination of classic songs from frontman David Coverdale's time as the lead singer for DEEP PURPLE's Mark III and Mark IV studio albums." Coverdale was DEEP PURPLE's vocalist from late 1973 to early 1976 and sang on the albums "Burn", "Stormbringer" and "Come Taste The Band". Other PURPLE classics revamped for "The Purple Album" include "Stormbringer", "Lady Double Dealer" and "Soldier Of Fortune".

Coverdale said that there was never any intention to compete against the original recordings. "We just wanted to play the damn songs," he explained. "Each member of the band brought their incredible individual talents and a real band identity to this music. We've all done the best we can with this project with respect to the music, and the legacy of DEEP PURPLE Mk3 and Mk4."

As previously reported, all of WHITESNAKE's previously announced touring activities, including this summer's U.S. trek with SAMMY HAGAR & THE CIRCLE and NIGHT RANGER, have been canceled so that Coverdale can undergo surgery for bilateral inguinal hernia.

Last month, WHITESNAKE postponed its Japanese tour due to the ongoing threat of the coronavirus.