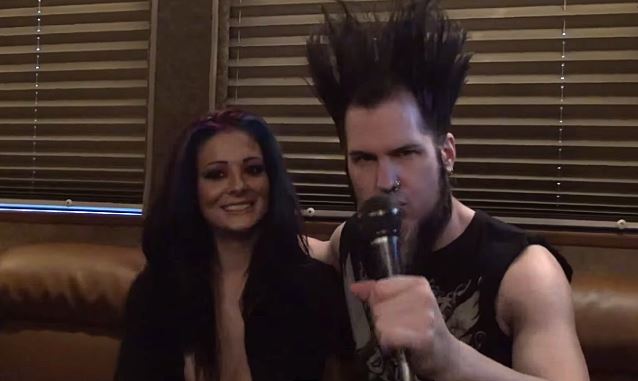 WAYNE STATIC's Wife TERA WRAY: 'WAYNE Was Not Taking Drugs And Did Not OD'

Tera Wray Static, the widow of STATIC-X frontman and founder Wayne Static, has released the following statement regarding the circumstances surrounding his passing and the negative speculation about the exact cause of his death:

"Today is my husband's birthday and instead of celebrating his 49th year of life, we are grieving his short 48 years.

"It has come to my attention that many have questions and opinions about the cause of the death of my husband in which I now find is necessary to further respond.

"Wayne was not taking drugs. If anything, he was a drinker, and did not OD.

"The autopsy will be done by this weekend at the soonest. However, for some of the test results it will take up to 6 months to get the actual death certificate finalized.

"I hope that the results I am given will have some insight, but they told me what I will receive this weekend will be deemed incomplete until all tests are back.

"We can all have opinions as to why.

"We all know that both Wayne and I had abused narcotics with alcohol in the past, which I am sure took a toll on his body, heart and soul.

"We were packing to travel on tour and were to leave that night, but it was Halloween and we decided to leave in the morning with our animals.

"I wish we had traveled that night then maybe had he fallen ill we could have gotten to the hospital. I will never know.

"I find it disrespectful to our families and myself for negative spins that are being posted.

"For Wayne's music peers to take it upon themselves to make comments about us when they are not part of our daily lives or know us outside of tour and music, just to grab a headline to get themselves at the top of the gossip page, is disgusting.

"This is not about you or what you feel is your expert opinion on people you have no relationship with, so shame on you. Do not act like we liked your band either.

"Wayne was a good soul and he is gone — that is what we do know. Please show some respect to him and his memory.

"We thank all that have left kind and positive messages in support of this terrible time. I am sure Wayne misses you too."

STATIC-X broke up in 2010, shortly after releasing its sixth studio album, "Cult Of Static". The band reformed with a new lineup in 2012, then disbanded permanently in June 2013.

Wayne Static was just getting ready to head out on co-headlining tours with POWERMAN 5000 and DROWNING POOL when he died.