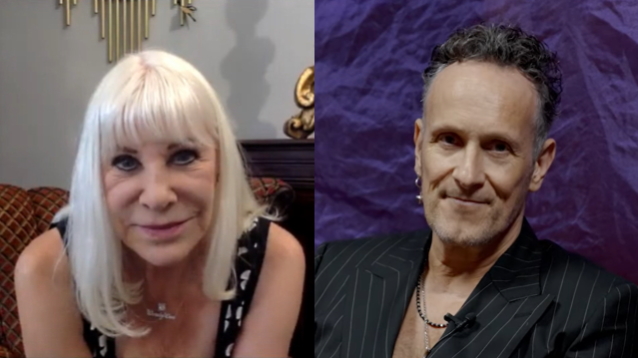 Wendy Dio says that Vivian Campbell's financial demands weren't the only reason he was fired from the DIO band.

Ronnie James Dio, Vivian, drummer Vinny Appice and bassist Jimmy Bain collaborated on the first three DIO albums — 1983's "Holy Diver", 1984's "The Last In Line" and 1985's "Sacred Heart" — before Irishman Campbell left to join WHITESNAKE in 1987. Vivian later publicly took issue with Ronnie's need for total control of the band, claiming that finances played a major part in the bad blood that preceded his exit. Specifically, Campbell said that "it had become increasingly clear" to him that "Wendy (as Ronnie's manager) was determined to separate the singer from the band. She didn't see DIO as one creative unit. Ronnie knew better, but I suspect that in an effort to win back Wendy's love" after the couple split, "he was willing to bend to her whims. Thus began the beginning of the end for the original DIO band."

Wendy, who married Ronnie in 1974 and managed his career until his death, discussed Vivian's departure from DIO in a new interview with SiriusXM's "Trunk Nation With Eddie Trunk". She said (as transcribed by BLABBERMOUTH.NET): "It wasn't just that [Vivian] wanted more money; he wasn't giving Ronnie any… Ronnie played off with the guitar player. He wasn't bringing anything to the table, as Ronnie said. Also, he was wanting to push the band more commercial, which Ronnie had fought all of the way along, with songs like 'Mystery'. Ronnie did not want to do things like that; he did not want to be poppy. And he was again being led by Vivian, along with the rest of the band, to be more commercial. And that was not what Ronnie wanted to do, and it wasn't what he was gonna do."

Campbell most recently addressed his claim that he and his DIO bandmates were earning "less than the crew" during an appearance this past April on the "Let There Be Talk" podcast with rock and roll comedian Dean Delray. Asked about the DIO financial situation while he was a member of the band, Vivian said: "The money was pretty grim. That was the whole reason why I got fired from DIO — because I was a squeaky wheel. That night in London in that rehearsal room [after the DIO band was formed] when Ronnie sat us down and said, 'Here's the plan. This is what we're gonna do,' he had promised us all that by the third record, it would be an equity situation, because, basically, we had to work for next to nothing for the earlier records. And the only reason I bought a Ferrari was three reasons: number one, it was a garden-variety [production Ferrari], the cheapest one; number two, the exchange rate when I bought it… I was getting paid in dollars, and the exchange rate was very, very favorable to buy sterling at that time. And number three, I ate crew meal for years; I didn't spend a penny. Anything I earned, my per diems or whatever, went right into a bank account and [I said], 'I'm gonna buy a car.' 'Cause at the time, I was still living with my parents in Ireland, so when I wasn't working with DIO, I'd fly home. I'd be, like, 'Hey, mom. Hey, dad. I'm back.' So I didn't have any overhead; I had no bills. So I kept everything. It was the same [as] years earlier when I was saving up to buy a Gibson Les Paul; I just focused on it. I wanted a 308 GTB Ferrari, so I saved up for a few years and got it.

"But the money situation in DIO was really bleak," Campbell reiterated. "We earned less than the crew. So we didn't get any of those records — we got none of the t-shirts, we got none of the ticket sales, we got none of the record sales. But we were working towards that promise which was by the third album it would be an equity situation. And when we started working on the third record, that's when I started going, 'Hey, Ronnie, you got a moment?' And he kept pushing it off and pushing it off. And then eventually they fired me. But I was a squeaky wheel. And it was less a matter of the money. I mean, yeah, it would have been nice to get paid for that, but it's more principle. I'm big on principle. When somebody looks me in the eye and shakes my hand and we have a gentlemen's agreement, I uphold my end of the deal and I expect the same of people. Maybe I'm an idealist or an idiot for expecting that of human beings, but that's what I put out and that's what I give and that's what I expect from people. And so it was a question of principle much, much more so than it was a question of dollars. With me, the promise was made, and the rest of us toiled for several years in the belief that that contract would be fulfilled, and it never was. 'Cause ultimately Ronnie never told Wendy, and Wendy was his estranged wife but his manager, and therefore, by default, the band's manager. But she never saw it as being a band; he never kind of explained that aspect to her. She always saw Ronnie Dio kind of like Ozzy Osbourne; it didn't matter who was behind him. But Ronnie should have known better. The magic of that original band, that's where I really had a beef with Ronnie. He knew how good that band was, and for him to be so fearful of Wendy that he wouldn't even have the balls to tell her that, 'This is what I want. This is what I promised the guys. This is what we're gonna do.' She just kind of went, 'No, no. You're the star. You don't need them. Get somebody else to play guitar.'"

In the summer of 2021, Wendy said that it was important for her to detail Ronnie's falling out with Vivian in the singer's memoir, "Rainbow In The Dark: The Autobiography", which she, along with writer Mick Wall, completed after Ronnie's death. "I wanted to, because I am so sick to death of hearing Vivian saying things like, 'Ronnie paid me a hundred dollars a week.' Well, how did he buy a Ferrari with a hundred dollars a week?" she told Ultimate Classic Rock. "Ronnie was always fair to his people. It costs a lot of money to put that show on. All of the time, we paid for everything — buses, trucks, hotels, per diems, lighting, sound and everything else. I think he treated the band very fairly. The problem is Vivian, for some reason, decided he wanted to be Ronnie. Well, you know, the band was called DIO. But the fact was that Ronnie had already been in RAINBOW and paid his dues and then in BLACK SABBATH and paid his dues. He wasn't just off the street and a nobody. I got really upset. I get really upset when I hear him saying all of the things about Ronnie. Ronnie isn't here to defend himself. I will. I have all of the paperwork to prove that. How much he did get paid. That just kind of upsets me that people will say, 'Oh, Ronnie was cheap.' Well, Ronnie was never ever cheap at all."

Asked if she thought there would have been a chance to build any sort of bridge between Ronnie and Vivian, Wendy said: "No. I don't think so, because there was too many nasty things by both of them said in the press, and I think you can't undo those things."

In a 2019 interview with Ultimate Guitar, Vivian said that getting fired from DIO left a bad taste in his mouth "for so, so many years. I was so hurt by the whole process that after that, I did make a mistake of saying very hurtful things about Ronnie in the press, as indeed he said the same about me," he said. "I think that was a mistake for both of us to do that. But it was a very painful thing for me because I never wanted to leave that band. I was fully invested in it, I enjoyed it immensely, I believed in it, and I gave blood, sweat, and tears on everything over the course of three albums to build that band. And then to be unceremoniously dumped like that was very, very painful for me. So it took me a long time to come full circle. To be honest, I think it also took Ronnie's passing [in 2010] to be able to look at that in a different light and realize that it was as much Jimmy Bain's heritage and Vinny Appice's heritage and my heritage as it was Ronnie's — we all owned those records and that history. So now I've come to fully embrace it, whereas for many, many years it was too painful for me to listen to it. If it came on the radio, I would turn the radio off. I didn't own any of the records, I wanted nothing to do with it. And now I see it in an entirely different light. I realize that we owned it as much as Ronnie and that it's a joyous thing to embrace. It makes me incredibly happy to be on the stage with Vinny, and with Jimmy while he was alive, and to play that music again. It's something I'm very proud of. But it took me a long time to get here, and that's the reason why."