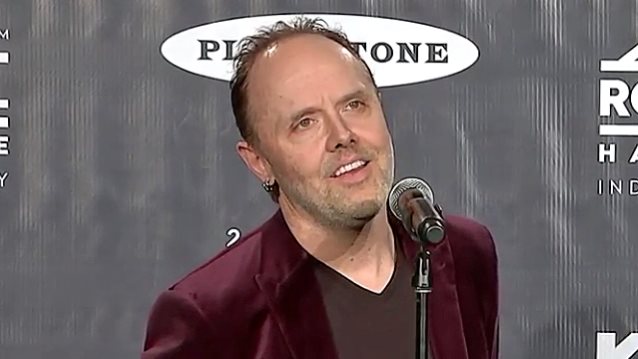 METALLICA drummer Lars Ulrich took questions backstage in the press room after inducting DEEP PURPLE into the Rock And Roll Hall Of Fame this past Friday, April 8 during a ceremony at Brooklyn, New York's Barclays Center. You can now watch video footage of the question-and-answer session below.

Asked which artists he would like to see inducted into the Rock Hall next, Ulrich said "Well, obviously, there's a slew of people from back in the day who should be next. I don't have this prepared, so forgive me if it's somewhat out of whack. But I guess off the top my head, I would say MOTÖRHEAD, IRON MAIDEN, BACHMAN-TURNER OVERDRIVE… I don't know… JUDAS PRIEST at some point, maybe… I think the one band that is eligible next year, if my math is close to being right, is RAGE AGAINST THE MACHINE, who I hope we don't have to wait decades for to get in, because their influence is, obviously, immeasurable. And so I would say that of the sort of later-generation bands, RAGE AGAINST THE MACHINE, hopefully, should be on deck, ready to come. But from bands back in the day, I mean, you know, URIAH HEEP, JUDAS PRIEST, RAINBOW maybe at some point… Thinking in the '70s and the early '80s, obviously, IRON MAIDEN, MOTÖRHEAD, JUDAS PRIEST… The list goes on. I'll remember all of them as soon as I step off the stage."

Despite the fact that artists are eligible for the Rock And Roll Hall Of Fame 25 years after the release of their first album or single, iconic hard rock and metal bands like IRON MAIDEN and JUDAS PRIEST have yet to be recognized by the institution, which inducted GUNS N' ROSES in that group's first year of eligibility.

KISS was passed over by the Hall since 1998 before finally getting the nod in April 2014.

METALLICA has been working on its tenth studio album, which could emerge sometime later this year.