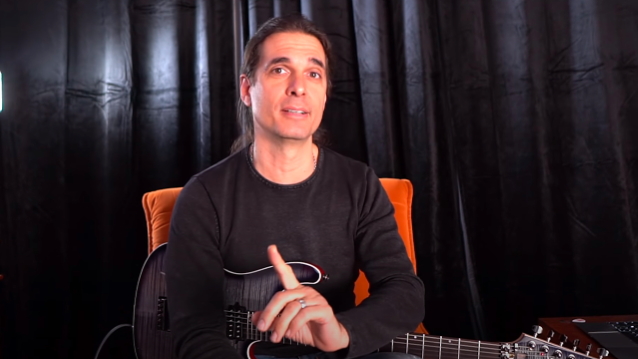 Which MEGADETH Guitarist Is Better: KIKO LOUREIRO Or MARTY FRIEDMAN? KIKO Weighs In

MEGADETH's Kiko Loureiro has uploaded a new video in which he answers the fan-submitted question: "Are you better than [former MEGADETH guitarist] Marty Friedman?"

In the clip, which can be seen below, Kiko states: "So when you start worrying about being better than other musicians, or if your band is better than the other bands, things like this, I don't think it's a good idea — it's not a good place to go.

"Basically, it's gonna be a long journey, learning an instrument and learning music, to find the best way you can express yourself, and you're gonna learn who you are. So it's a long journey, it's difficult, and the competitor is only you. So, basically, during your whole life, you'll be learning how to play, and when you start learning, of course, you have to copy other players. And the more players you start learning things from or copying or different styles of music, the more the better, because you will find things that connect with you — you're gonna inhale that, you will digest that, and somehow you're gonna put it out the way you feel like that's your way. Actually, that's a key thing — everything that you learn from other musicians, from other players, you have, right away, to try to make your own, or you have to put it out somehow. You don't need to copy. That's why sometimes I get some comments that I'm not playing exactly the same notes as Chris Poland or Marty Friedman. And you know what? I don't want [to]. I can't, first of all — I'm not able to do it — because I never really tried to copy other players note for note, and then it's very hard. It's impossible to imitate other players, and that's not my goal.

"It's interesting when people ask if I'm better than the other guy, or this guy is better than the other one. It doesn't matter — it doesn't matter. It's how you feel when you play. If you feel good about what you're playing — 'I love this. And that's me. And I'm having fun playing. And I'm finding new things here. And I'm discovering new sounds. And I feel that I'm getting better.' Because you're the only one that you have to really try to compete with. You have to look at yourself, like, one year ago and see if you're a better musician. I wonder if Kiko next year — 2021 Kiko — is better than me now. So that's my goal. It's not about playing faster, it's not about playing cleaner, it's not about knowing more scales. It's about, 'I'm feeling good expressing myself with the tools that I know, with the tools that I have now, and I'm feeling good doing that.' So that's the main thing. So if I'm better than Marty Friedman, I don't know.

"I have something to say here in this video, because it's about that, actually. Because for the last five years, I've always been compared to Marty Friedman, and Marty Friedman is a great musician — not only a great guitar player but an amazing musician. And I'm a big fan of his solo work and CACOPHONY and, of course, other MEGADETH years, and I had a chance to meet him two times and have great conversations about music and about life with him.

Loureiro has set "Open Source" as the title of his fifth solo album. The disc will be the follow-up to "Sounds Of Innocence", which was released in June 2012.