"This Is Exile", the new video from Knoxville, Tennessee-based death/grind metallers WHITECHAPEL, can be viewed below. The clip was directed by David Brodsky, who has previously worked with ALL THAT REMAINS and THE RED CHORD, among other bands. The song is the title track of WHITECHAPEL's new album, which is scheduled for release on July 8 through Metal Blade Records.

"This Is Exile" was tracked by Jonny Fay (ex-guitarist of THE RED CHORD) of Backyard Studios in New Hampshire and was mixed by Zeuss, who has produced ION DISSONANCE, EMMURE, BLOOD HAS BEEN SHED, SHADOWS FALL and HATEBREED, among others. The cover artwork was handled by Colin Marks, who has previously worked with ABORTED, THE END, STRAPPING YOUNG LAD and THE RED DEATH). "He [did] a phenomenal job and we are extremely pleased with the outcome of his work," the band previously stated. "He has done a wonderful job of portraying the concept of the record through his artwork." 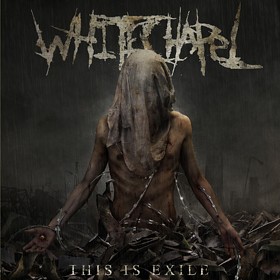 "This Is Exile" track listing: