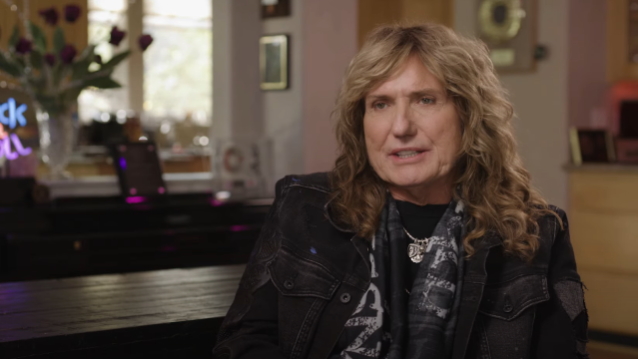 WHITESNAKE has revisited its multi-platinum career by remixing some of its biggest hits for a new collection, "Greatest Hits", which was made available on May 6 on digital and streaming services.

WHITESNAKE founder and lead singer David Coverdale had 16 tracks remixed and remastered for this collection, including "Here I Go Again", which was originally released on the band's 1982 album, "Saints & Sinners". The power ballad was re-recorded for WHITESNAKE's 1987 self-titled album and was released as a single, after which it hit No. 1 on the Billboard Hot 100 chart and No. 9 on the U.K. Singles chart.

Regarding the decision to re-record "Here I Go Again" and the role of MTV in making the track a worldwide success, Coverdale said (as transcribed by BLABBERMOUTH.NET): "Well, first off, it was Geffen's idea to re… I never re-recorded things other than a song called 'Blindman' which was on my original solo album, [1977's] 'White Snake', and then we put it on [WHITESNAKE's 1980] 'Ready An' Willing' album because then that's when I felt we really had the solid idea of the early WHITESNAKE, with Bernie Marsden, Micky Moody, Neil Murray, Jon Lord and Ian Paice, and they did a masterly job on it. But I've never been one for re-recording. And John [Sykes, then-WHITESNAKE guitarist] and I had written enough for an album of original material. But [Geffen] wanted to do — and this has served us incredibly well — redo 'Here I Go Again'. John was not pleased, but history speaks for itself. And I said, 'Well, if we're gonna do that, I wanna redo 'Crying In The Rain',' which I was never really happy with the original recording of it. And we had arranged — John, Neil Murray and I had arranged — a special centerpiece, which was a great solo for John, a solo feature. But also the whole album was pretty much designed for [drummer] Cozy Powell — God rest his soul. And when we featured it in concert, it went from John's amazing, electrifying solo into Cozy's extraordinarily earth-shattering, thunderous drum solo.

"We had a great relationship with radio for the 'Slide It In' album, and they were actually waiting for a new WHITESNAKE album, rock radio. So we delivered this thing. And of course, at that time MTV was a huge element globally. So WHITESNAKE from being successful in a couple of territories became a global entity, which was super validation, as you can imagine."

A year ago, "Here I Go Again" saw a renewed interest following the death of actress Julie E. "Tawny" Kitaen, who appeared in the song's video. Kitaen passed away at her home in Newport Beach on May 7, 2021 at the age of 59.

While WHITESNAKE was working on it 1987 self-titled album, Coverdale started dating Kitaen, who had recently starred opposite Tom Hanks in the movie "Bachelor Party". Kitaen soon appeared in several of WHITESNAKE's music videos, including those for "Here I Go Again", "Is This Love" and "Still Of The Night". Footage of Kitaen writhing around on the hood of a Jaguar in the "Here I Go Again" clip has been called one of the most iconic — and sexiest — video moments ever filmed.

Coverdale and Kitaen tied the knot in 1989 but the union only lasted two years.

Soon after its release in April 1987, "Whitesnake" became a huge success around the world, selling several million copies. It peaked at No. 2 on the Billboard album chart and spawned four popular singles: "Still Of The Night", "Give Me All Your Love", "Is This Love" (which reached No. 2) and "Here I Go Again".

WHITESNAKE has just embarked on a farewell tour with special guest EUROPE. The first leg of "Whitesnake: The Farewell Tour" kicked off on May 10 in Dublin.

Last July, WHITESNAKE announced that it had enlisted Croatian singer/multi-instrumentalist Dino Jelusick for its current tour. Jelusick is a member of multi-platinum selling band TRANS-SIBERIAN ORCHESTRA and was previously part of DIRTY SHIRLEY (with George Lynch),ANIMAL DRIVE and recorded with many others. The 29-year-old Dino has been singing, touring and recording since the age of five. Other than being a frontman, his main instrument are keyboards but he also plays bass, guitar and drums. He finished music academy and did theater work.