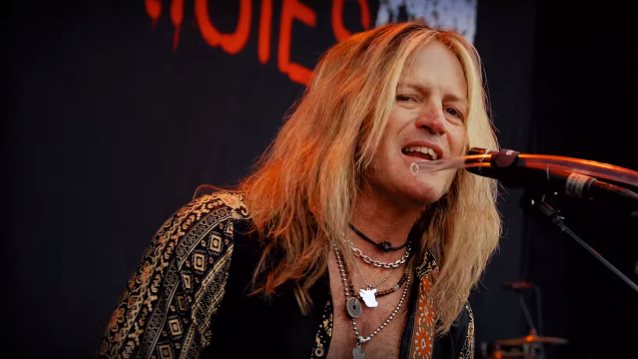 Doug Aldrich says that Ronnie James Dio and Gene Simmons should both be credited for popularizing the famous rock n' roll "devil horns."

The late BLACK SABBATH and RAINBOW singer is frequently recognized for making the hand gesture mainstream — a staple at rock concerts for decades — which the KISS bassist/vocalist filed an application to trademark on June 9, only to abandon it less than two weeks later.

Aldrich, who played with Ronnie in DIO and famously auditioned for KISS in 1982, was asked by Spain's GoetiaMedia.com for his thoughts on whether Dio or Simmons came up with the "devil horns." Doug said (hear audio below): "I would have to say… It's very difficult, because they're both friends of mine. Ronnie, obviously, is not here. I would have to say it's very difficult. I don't know who did it. I would reckon that Ronnie did it earlier than Gene, but I would reckon that Gene equally could have come up with it. So I think it's 50-50. But I think that when people think of the devil horns, they think of Ronnie the most."

He continued: "Ronnie told me the story. He said it was his grandmother [who] used to… It was called the 'evil eye'; he would do it. And people always do the devil horns and they face it to themselves — like a backwards devil horn — but that's not what you're supposed to do, 'cause the devil horn is supposed to keep bad people away. You have to point it to them — that's what Ronnie always did. Ronnie never turned it around backwards. You notice that? 'Cause his grandmother told him — that you point it at the people who've got the bad spirit, and it keeps the bad spirit away from you, it protects you. So Ronnie would always do that."

Aldrich added: "I feel like Ronnie put it really from his heart, through his arm into his hand, and he would send out this positive thing to his people. And at the same time, I've seen Gene do that sign since I was a kid. So I don't know, man, who did it. But it's business, so whoever is lucky enough to get the trademark, that's really cool. Why not? Gene can have it. But maybe Ronnie's family should have it. Maybe they should split it."

Ronnie James Dio, who reportedly didn't start using the hand gesture on stage until after joining BLACK SABBATH in 1979, himself declined to take credit for the symbol, explaining in a 2001 interview: "I doubt very much if I would be the first one who ever did that. That's like saying I invented the wheel. I'm sure someone did that at some other point. I think you'd have to say that I made it fashionable. I used it so much and all the time and it had become my trademark."

Dio ― who said his Italian grandmother often invoked the horns to ward off the malocchio (the evil eye),bad luck or malevolent spirits ― also took issue with Simmons.

"Gene Simmons will tell you that he invented it," Ronnie once said. "But then again, Gene invented breathing and shoes and everything else."

Ronnie James Dio's widow Wendy also criticized Simmons for attempting to trademark the hand sign. She told TheWrap: "To try to make money off of something like this is disgusting. It belongs to everyone — it doesn't belong to anyone. It's a public domain, it shouldn't be trademarked."

Most music fans have slammed Simmons for the trademark request, saying the symbol has become ubiquitous and means different things to different people.

When asked if it was Ronnie James Dio who actually started it, Simmons told Classic Rock magazine: "Well, I've heard Ronnie say that to my face and I said, 'God bless you.' I mean him no ill will, but I think he's wrong. Mine came from Spider-man doing his hand signal, as a homage to him. If you see me in photos, I'm sticking out my thumb. That's the sign in sign language which means 'I love you.'"