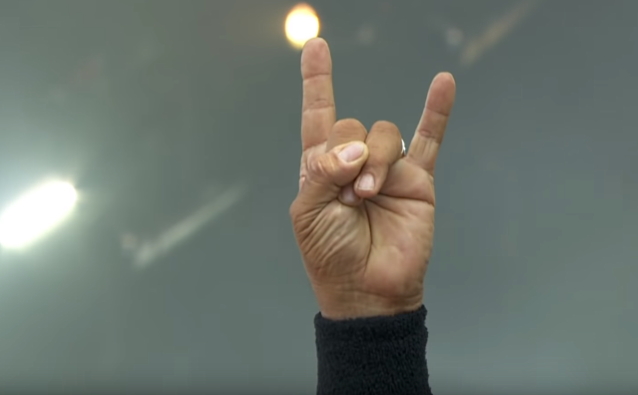 Who Invented The Devil Horns? AXS TV's 'Music's Greatest Mysteries' Attempts To Get To Bottom Of Decades-Long Debate

An episode of AXS TV's popular investigative documentary series "Music's Greatest Mysteries" focusing on the origin of the so-called "devil horns" will premiere on Wednesday (July 14). A preview is available below.

"Music fans have questions and 'Music's Greatest Mysteries' has the answers, making it the perfect addition to our all-new Wednesday night lineup which digs deep into the world of music and takes fans behind the scenes," said Sarah Weidman, head of original programming, development and multi-platform content for AXS TV. "From the heartfelt and inspiring, to the strange and even sinister, music history is packed with fables and figures that have kept fans intrigued for decades. Our viewers loved hearing the stories we shared when 'Music's Greatest Mysteries' premiered last fall, and we have even more incredible tales and water cooler fodder to share."

"'Music's Greatest Mysteries' blends together a passion for music with an investigative curiosity about our music legends, resulting in a unique perspective on some amazing stories," said Chip Rives, director and executive producer, Texas Crew Productions. "We can't wait for viewers to experience these six new episodes and finally get answers to some of music's greatest mysteries."

Late BLACK SABBATH and RAINBOW singer Ronnie James Dio is frequently recognized for making the hand gesture mainstream — a staple at rock concerts for decades. However, this past March, SABBATH bassist Geezer Butler said that he was using the so-called "devil horns" years before Dio adopted it as his own.

Ronnie wasn't the only high-profile rocker to take credit for the devil horns. Back in June 2017, KISS bassist/vocalist Gene Simmons filed an application with the U.S. Patent and Trademark Office for a trademark on the hand signal fans and rockers alike hold up during shows, in which the index and pinkie fingers are extended, the middle and ring finger are curled into the palm, and the thumb either sticks out from the hand like an errant branch from a tree or is also curled into the palm. Gene claimed the gesture was first used in commerce on November 14, 1974, which corresponds to KISS's "Hotter Than Hell" tour. He wrote in his signed declaration that he believes "no other person, firm, corporation or association has the right to use said mark in commerce, either in the identical form or in such near resemblance." Less than two weeks later, Simmons withdrew the application.

During an episode of her show "The Talk", Sharon Osbourne slammed Simmons for the trademark request, accusing the rocker of "trying to make money from posters and t-shirts." She said: "He's crazy. He's trying to get money from the merch where you see this [gesture] on merch, but actually this [symbol], in Italian, which has been going for hundreds of years, means 'the devil.' That's what it means. And so kids at concerts have been doing it for years and years and years. And in '74? Where were you in the '60s when they were doing it, kid, because they've been doing it forever."

Ronnie James Dio's former wife and longtime manager Wendy Dio also criticized Simmons for attempting to trademark the hand sign. She told TheWrap: "To try to make money off of something like this is disgusting. It belongs to everyone — it doesn't belong to anyone. It's a public domain, it shouldn't be trademarked."

Ronnie himself has poked fun at Gene for attempting to to take credit for the devil horns. "Gene Simmons will tell you that he invented it," Dio once said. "But then again, Gene invented breathing and shoes and everything else."

Everyone loves throwing up the horns, but where did the iconic symbol come from? 🤘 #MusicsGreatestMysteries