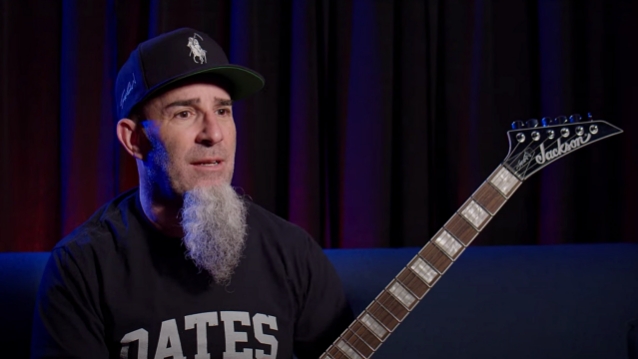 ANTHRAX's SCOTT IAN: The First Song I Learned On Guitar

Scott Ian has been ripping up stages for over 40 years now in ANTHRAX, but one of his earliest appearances was at an elementary talent show in fourth grade school and it was a far cry from his thrash metal career. Watch the video below from Jackson Guitars as he goes down memory lane with the first few songs he learned to play on guitar, including THE SURFARIS version of "Wipe Out".

Back in 2018, Ian told the "Sixx Sense" radio show that started playing guitar when he was eight years old, around 1971 or 1972. "So everything from the '70s for me was — I was just learning, learning, learning," he said. "I would sit at home with the records and just learn the chords. And that thing has a lot to do with why I stuck to rhythm and becoming a rhythm player. Some of it comes from laziness, because I just wanted to learn the songs. So when I would come home with an AC/DC record, I would learn all the chords, I would learn all the songs, but I couldn't be bothered to sit and — like some of my friends — slow the record down and learn Angus's solos. In a time it would take me to do that, I could learn a whole another album of songs. And I felt that's what the song is — it's the chords. I don't care about all that other noodly stuff. [Laughs]

"Rudy Schenker from the SCORPIONS was a big influence on me as well. Again, the guy who's strictly the rhythm guy, and he just had such a driving energy. Just the power of his chords. And, of course, you see them live and he's like the lunatic on stage. And even for a guy like me in the '70s, Ted Nugent — people think of him as a lead player, but for me it was always about his groove. When you're 13 and you hear that riff, your boner is, like, 'Oh my god! What is that?! I need more of that!'"

ANTHRAX's latest album, 2016's "For All Kings", was called by some critics the band's strongest LP to date. Its arrival followed a five-year period during which the band experienced a rebirth of sorts, beginning with ANTHRAX's inclusion on the "Big Four" tour, and continuing with the 2011 release of comeback effort "Worship Music".