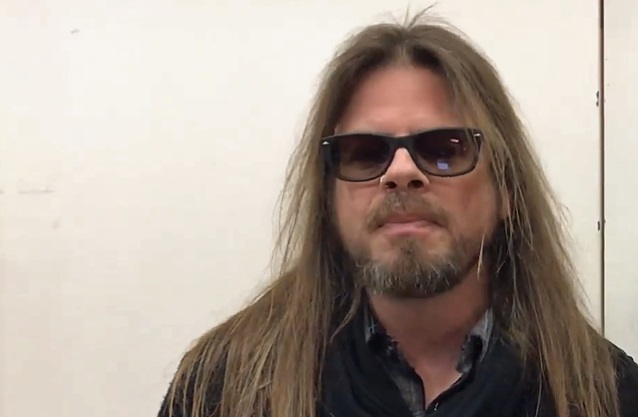 QUEENSRŸCHE singer Todd La Torre has refused to reveal the identity of the person who laid down the drums tracks on the band's upcoming album.

For the past year, QUEENSRŸCHE's founding drummer Scott Rockenfield has been taking time off from the band's touring activities to spend time with his young son, who was born in February 2017. Filling in for him is former KAMELOT drummer Casey Grillo.

Earlier this year, QUEENSRŸCHE entered the studio with producer Chris "Zeuss" Harris to begin recording the follow-up to 2015's "Condition Hüman" LP, but has not indicated if Rockenfield was involved with the making of the disc. However, the band did confirm that Grillo did not play on the record, which will mark QUEENSRŸCHE's third full-length release with La Torre, following the departure of Geoff Tate in 2012.

Asked in a brand new interview with "Rock Talk With Mitch Lafon" who recorded the drums on QUEENSRŸCHE's next CD, Todd said: "That's the 25-thousand-dollar question everyone keeps asking. My short answer is I'm not gonna tell you right now. [Laughs]

"Some people say, 'Well, if Scott played on it, why wouldn't you just say that? Because you're not saying it, maybe he didn't.' And then some people have said, 'Well, maybe they're just not saying to create hype around the album,' and blah blah blah. So the only thing I can tell you is that Scott had a baby and he took paternity leave, took time off. That was April of last year. I remember that Casey… we called him to do a couple of fill-in dates, and then it turned into more time and more time. And then it [became] a few months. And then [Scott told us], 'Well, I wanna take the rest of the year off.' 'Oh, okay.' And then, 'Well, what about January?' 'Well, I don't know yet.' And so the end of the year was approaching and then the beginning of 2018 would be starting, and we hadn't gotten any real answer. And so to make sure that we could still play our shows and have QUEENSRŸCHE continue on and book things and do what we do, Casey has decided to keep filling in.

"There's no new update that I'm aware of from Scott," Todd continued. "He hasn't quit the band, he hasn't said, 'I'm never coming back,' or yada yada. All that we know, really, is he's just enjoying spending time with his son, who's a little over one year old; I think he was born in February [of 2017]. I mean, the guy gave almost 37 years of his life to QUEENSRŸCHE and to the fans and whatnot and he wants time for himself and his family. So how can you argue a guy wanting to just be a dad, just that? So that's kind of the deal."

The 44-year-old St Petersburg, Florida resident, who originally started out as a drummer, continued: "As far as the album goes, we didn't have outside writers and outside hired guns to play drums on the record. The band QUEENSRŸCHE wrote and recorded the album, and it's certainly true to form. I think everyone will… hopefully they'll agree with that when they hear it; we hope they like it. You never know — when you're creating something and then you put it out, it's kind of not yours anymore once you release it."

Circling back to the drummer-identity question, Todd said: "I wish I could give you a definitive answer, but I'm not going to."

As for the progress of the recording sessions for QUEENSRŸCHE's next album, Todd said: "I'm gonna be getting some updated mixes this evening. I flew out to [Zeuss's] place in Massachusetts with Eddie [Jackson, bass] and did another about four songs on vocals, just to address some things and tighten up some things. And I think there's maybe just about two songs left for me to sing — somewhere in there. I know that Michael [Wilton, guitar] and Parker [Lundgren, guitar] have been writing and crafting guitar solos and sending those to him. I think he may… I'm not sure if he's gonna go to Seattle or maybe they'll do one more trip to his place to kind of finalize those things. But out of all the songs, there's only a couple left for me to sing. They're sung in the demo form, but we'll go back and that's where he'll kind of more 'produce' me and go over all the nuances. And we might experiment and try some various approaches to something to see if it can be improved, if it needs it — things like that. But the bulk of the record is done, minus some guitar solos and still a couple of songs on vocals."

Torre was equally cagey about a possible release date for QUEENSRŸCHE's next LP, saying: "That's a good question. I know that we were shooting for a September or October release, and then there was some discussion with the label about them potentially or likely wanting some bonus material. So there are some things that Michael has been recording and if in fact that's the definitive case, then we're still gonna shoot for that. But worst-case scenario, maybe it comes out February [of 2019] or whatever. But certainly we will be doing video shooting this year and start kind of priming the pump to really start promoting the album prior to the release. So I'm sure that we'll release a video, I'm thinking, prior to the release. Don't hold me to that, but I'm pretty sure we'll throw a video out before the album release and put together some kind of teaser, collage of some sort, and do it that way. But we're still going over artwork for the album cover and then anything inside. And so that's a whole another process, of just dealing with artwork and concepts and different mock-up renderings and moving forward with that. We've seen a tentative album cover concept, and, actually, I'll be having a meeting with the artist tonight to go over some changes that the band, we all, talked about, and kind of go from there… So I can't give you a definitive answer. It could be late this year. Worst case, it would be very early next year."

Back in December, La Torre spoke to KNAC.COM about where he is getting his lyrical inspirations from for the new QUEENSRŸCHE material. "A lot of the stuff on this, I think, just has to do with, again, the political spectrum and just what's going on in the world," he said. "And QUEENSRŸCHE always injected those kinds of topics in their content. And so a lot of it has to do with just what's going on socially and politically, and globally and these subjects are timeless. So, if you listen to songs from the '60s that have to do with social discourse and stuff like that, it still applies today."