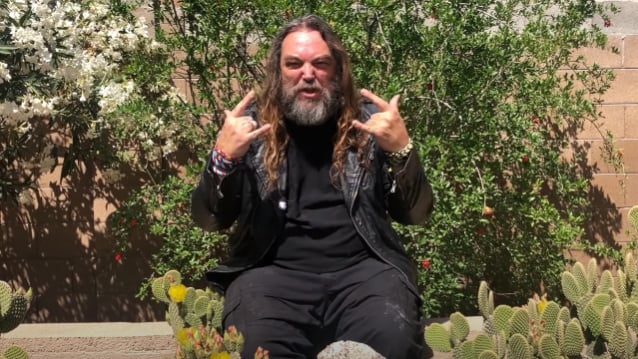 Who Should Play Guitar And Drums For PANTERA On Upcoming Tour? MAX CAVALERA Weighs In

Former SEPULTURA and current SOULFLY frontman Max Cavalera says that he is "excited" about the upcoming PANTERA reunion tour.

The 52-year-old Brazilian-born musician made his comments one day after Billboard reported that singer Philip Anselmo and bassist Rex Brown have signed with Artist Group International to book the PANTERA North American dates. However, there has been no official word yet as to who will step in for guitarist "Dimebag" Darrell Abbott, who was killed in 2004, and his brother, drummer Vinnie Paul Abbott, who passed away in 2018.

Earlier today (Thursday, July 14),Max, who has spent the last few years playing SEPULTURA-centric shows with his brother, former SEPULTURA drummer Igor "Iggor" Cavalera, told the "Talk Toomey" podcast about the prospect of Anselmo and Brown reuniting for a PANTERA tour in 2023: "Just like if they're doing [their tour] like [Igor and I] are doing [it] as a tribute [to the original albums], [it's] totally cool. Awesome." Referencing the criticism that has already been leveled at Philip and Rex for touring as PANTERA without the Abbott brothers, Max said: "You kind of can say similar things about our stuff because it's not all the four original guys, but it's as close as you get to that, and it's done really well.

"But, yeah, I'm excited," Max added. "Those [PANTERA] records are so good, they have so many fans, and they should be heard. And rest in peace, Vinnie and Dime, but if it's done right with the right heart on it, hell yeah — I'm totally on board. I think it would be great.

"This new generation, they embrace that stuff. So this music doesn't get outdated. It's not like some stuff that with time just kind of fades out; it's out of fashion. It doesn't happen with this music. So I think all of those records are like that. And, of course, PANTERA is the same vein with 'Far Beyond Driven', 'Cowboys From Hell' — those are some great fucking records, man. People want to hear it. I think it's cool. It should be fun."

Asked who he thinks should play guitar and drums in PANTERA's touring lineup, Max said: "Ooohhh... I wasn't prepared for this [question]... I would go with Chris [Ulsh] from POWER TRIP; that would be my drum choice. And then on guitar, man, even Gary Holt would have been cool. He played with SLAYER and EXODUS and is part of the era. To me, that would be the two that I would think would fit in pretty cool."

As previously reported, Wylde and ANTHRAX drummer Charlie Benante are rumored to be the musicians who will join PANTERA's surviving members on the 2023 tour.

Up until his passing, Vinnie remained on non-speaking terms with Anselmo, whom the drummer indirectly blamed for Dimebag's death. (Anselmo's comments in the U.K. music press about how Dimebag should be "beaten severely" were unfairly linked to some of the guitarist's shooter's motive.)

In a 2006 interview with Revolver magazine, Vinnie dismissed Philip's claim that the singer was close friends with Dimebag before the guitarist's death.

"If Dime was his friend, why wouldn't he take his phone calls?" Vinnie said about Philip. "How could he piss on the dude the way he did? How could he say what he said about my brother in magazines?" [Notably, in U.K. hard rock magazine Metal Hammer, Anselmo said of Dime, "Physically, of course, he deserves to be beaten severely."

When the interviewer noted that Anselmo had denied making the comment, Vinnie fired back: "He said it word for fucking word. He was not coerced, and the kind of shit he said is the kind of shit that might incite the guy that did this [killed Dime]. Phil called me when he was trying to get into the funeral and left me a message that said, 'I can prove to you I didn't do that interview.' I got the fucking audio files, man. Anyone that wants to hear them, I'll be happy to play them for you. So he ought to feel really fuckin' guilty any way you slice it. And as far as him calling Dime 'my guitar player' [in the February 2006 issue of Revolver], that's how Phil thinks. Everything is his. I could elaborate for a long time. The dude did exactly what I thought he would do, and that's lie about everything."