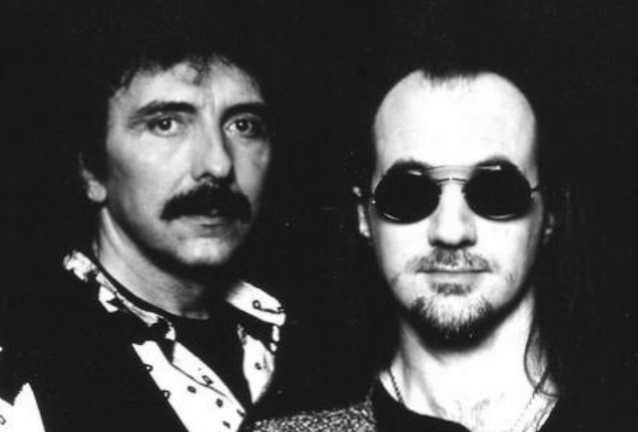 Former BLACK SABBATH singer Tony Martin says that he has no idea what is going on with the proposed reissues of the albums he recorded with the band.

Martin discussed the possibility of the LPs from his era of SABBATH being reissued in a brand new interview with Canada's The Metal Voice. He said (as transcribed by BLABBERMOUTH.NET): "We had a guy in BLACK SABBATH called Geoff Nicholls. He was the keyboard player. He died four years ago. And when we [were] at Geoff Nicholls's funeral service, I bumped into Tony Iommi there, and he said, 'I've got loads of stuff to play you. And we have to get together and see if we can write some new songs. And then maybe we can re-release the Tony Martin-era albums.' And I thought, 'Well, that's cool. Okay. Whatever.' Then the phone went dead for ages — months and months and months and months. So I called him back and he said, 'Come over to the house and we'll talk about it.' So I said, 'Okay.' So I went to his house and he said, 'We can't do it.' And I went, 'What?' He said, 'We can't do it.' I said, 'Why not?' He said because there's an agreement with the guys of SABBATH that they can only release something [new] under the SABBATH name if it's the original SABBATH members. Nobody else can record anything [new] under the SABBATH name…. What he said was what we can do is reissue the albums. We can't add anything to it. So what we're expecting, if he ever gets around to it, is for the Tony Martin-era albums, apart from 'Eternal Idol', 'cause that's owned by someone else, to be reissued. Remixed probably in the case of 'Forbidden', but I think it'll just be as it was… [We can add] only stuff that's already been recorded at the time."

According to Martin, he has already found loads of recordings in his personal collection that would be perfect for inclusion on proposed issues of the SABBATH albums from his era of the band.

"I've searched through… I've got hundreds of tapes — things from the writing sessions," he said. "I've got the tapes when Eddie Van Halen was with us writing on 'Cross Purposes'. I sent that over to Tony. That appeared on YouTube; I don't know how that got out. But I've got all sorts of stuff like that. And I thought that was the kind of thing that they would reissue the albums with. But I have no idea. You probably know more than me."

Original SABBATH singer Ozzy Osbourne filed a lawsuit against Iommi in May 2009, claiming that Tony illegally took sole ownership of the band's name in a filing with the U.S. Patent and Trademark Office.

Osbourne sued Iommi for a 50 percent interest in the "Black Sabbath" trademark, along with a portion of Iommi's profits from use of the name.

The Manhattan federal court suit also charged that Osbourne's "signature lead vocals" are largely responsible for the band's "extraordinary success," noting that its popularity plummeted during his absence from 1980 through 1996.

Lawyer Andrew DeVore argued that Osbourne signed away all his rights to the BLACK SABBATH trademark after he quit the band in 1979.

Osbourne's lawyer, Howard Shire, called that agreement a "red herring" that was "repudiated" when the singer rejoined in 1997 and took over "quality control" of the band's merchandise, tours and recordings.

In June 2010, Ozzy told The Pulse of Radio that the lawsuit between him and Tony had been settled and that everything was okay between them.