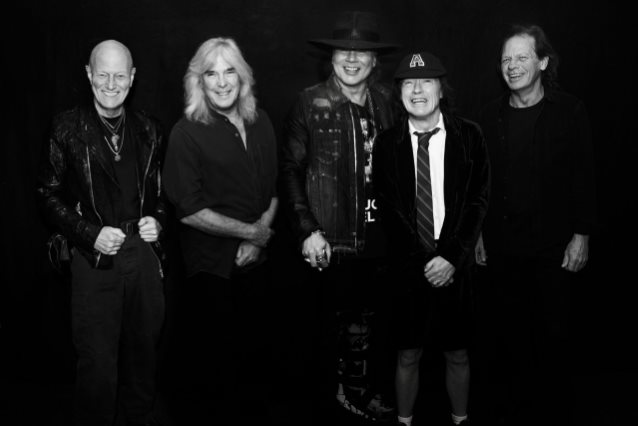 AC/DC drummer Chris Slade says that his "lips are sealed" when it comes to answering questions about the possibility of the band making a new studio album with Axl Rose on vocals.

Ever since AC/DC completed the tour cycle for its 2014 album "Rock Or Bust" nearly two years ago — a turbulent trek that weathered the forced retirement and eventual death of co-founder Malcolm Young, plus the departures of longtime singer Brian Johnson, drummer Phil Rudd and bassist Cliff Williams — fans have wondered whether sole founding member Angus Young would keep the band going or decide it was time for AC/DC to pack it in.

Asked by Duke TV if there are plans for AC/DC to record a new album with Axl, Slade laughed and said (see video below): "My lips are sealed. And if I knew, I couldn't say a word anyway. What I usually say is if I tell you, I have to kill you." He laughed again and continued: "Which, perhaps, is not in good taste. I couldn't even start to answer that, I'm afraid."

With Axl on vocals, AC/DC broke out a number of somewhat more rare cuts during the band's European and American shows two years ago, including "Given The Dog A Bone", "Rock 'N' Roll Damnation", "Riff Raff", "Touch Too Much" and "If You Want Blood (You've Got It)" .

"Axl, he actually asked… I was standing right next to him when he asked Angus, 'Can we do these songs?'" Slade said. "And I love playing 'Riff Raff', and I always have. In fact, we do it with [my solo band] TIMELINE. All those songs were great, and the fans loved them — absolutely loved it. Because they'd like to hear those songs too. Axl is a big fan, you see, and still is, of AC/DC. Those are songs that he would like AC/DC to play — those newer… Of course, they're old songs, but new for the band playing onstage. I don't think they played 'Riff Raff' on stage for about 25 years, maybe even 30. I know they used to open with it, didn't they? But they hadn't played it since then."

Chris also spoke about Malcolm Young, who was diagnosed with dementia several years ago and bowed out before the sessions for "Rock Or Bust" began. The guitarist died this past November.

"He was a genius — genius rhythm player," Slade told Duke TV. "Probably, I always, the greatest rhythm player ever born. Just tremendous. Wonderful timing. Just absolutely brilliant. He made my job so easy. The only time he ever said anything to me was I had an energy massage. I remember it was in New Mexico, on the road, and the gig was the next day. So I had this massage of this American Indian lady. And she said, 'Tomorrow, you'll have so much energy, you won't know how to deal with it.' And I went, 'Yeah. Okay.' And I got to the show that night, and I really was wound up. 'Cause I've never done drugs, by the way, so it's not an analogy. I've never done drugs in my life. And there was one time we were playing half way through the show, and Malcolm leans over to me and he goes, 'You're pushing. You're rushing ahead.' And I was. And I never do that — I don't rush or drag. And that was the only time he ever sort of said, 'Maybe you're doing it wrong.'"

Chris continued: "[Malcolm] was a great guy and a genius songwriter — him and Angus — and a genius guitarist. He's greatly missed. Stevie did a great job — there's no doubt about that," referring to Stevie Young, Angus and Malcolm's nephew, who took Malcolm's place in the band prior to the recording of "Rock Or Bust". "It's a hard act to follow, to follow Malcolm — one of the most difficult, I would say, in the music business. There aren't many people who could do that, and Stevie did a great job."

Johnson was forced to leave AC/DC mid-tour due to a dangerous level of hearing loss, while Rudd was dismissed following a drug arrest and Williams decided to retire at the end of the cycle.

Angus has not said publicly what he has planned for the future of AC/DC. Axl is still touring with GUNS N' ROSES but has indicated a willingness to work with AC/DC again. It is also unknown whether Angus will keep the other members of the last touring lineup — including Stevie Young and Chris Slade — or revamp the roster again.

Chris returned to AC/DC in early 2015 in time to perform with the band at the 57th annual Grammy Awards.

Slade followed Simon Wright in AC/DC's lineup, joining in time to play on 1990's "The Razor's Edge" album. When Phil Rudd came back in 1995, Slade was shown the door and harbored some bad feelings about that for a while.