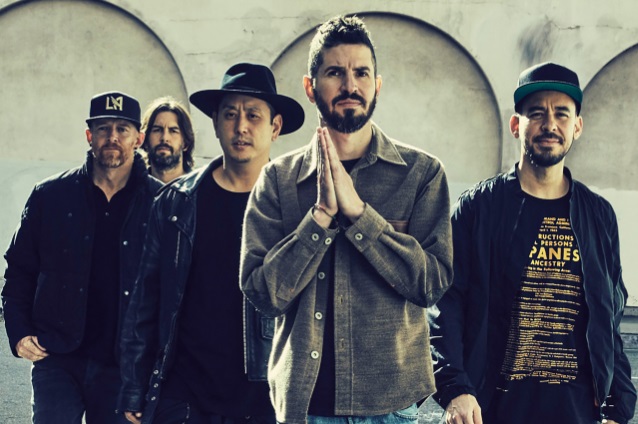 LINKIN PARK vocalist Mike Shinoda spoke about the band's future during an appearance on the first episode of "Inside The Studio", a brand new podcast series on iHeartRadio.

Asked if LINKIN PARK will continue, nearly one full year since the death of singer Chester Bennington, Mike said (hear audio below): "I don't know. That's the million-dollar question, right? And, unfortunately, I've said it before, but, unfortunately, there aren't any answers to that at this point. It would be awesome if there were. That would be really easy. I wish we were in a Brian Johnson/Bon Scott situation where it's, like, no, the guy, our best friend, who sang for the band who passed away, he literally said, 'This is the guy,' and we listened to the guy and the guy's definitely the guy, and we all love hanging out with him, and we want to play with him. That's not a normal... That didn't happen to anybody else, really. That hasn't happened to us."

Mike went on to give more insight into how he and his bandmates are feeling about carrying on without Chester, explaining: "If somebody comes and says, 'Hey, LINKIN PARK, do you want to play a show in Germany?' then you have to have a discussion with all the guys, and you have one guy who's, like, 'I definitely don't want to do it,' and you have one guy who says, 'I don't know. Maybe. Maybe we shouldn't do it,' and two guys who say, 'We definitely need to do it,' and then there's concerns. All that noise, that is not something I can deal with right now, and it's not a knock on anybody else. Any one of us could be the outlier opinion, the minority voice on something, but I definitely need some more simplicity in terms of decision making."

Shinoda's solo album "Post Traumatic", is due on June 15.