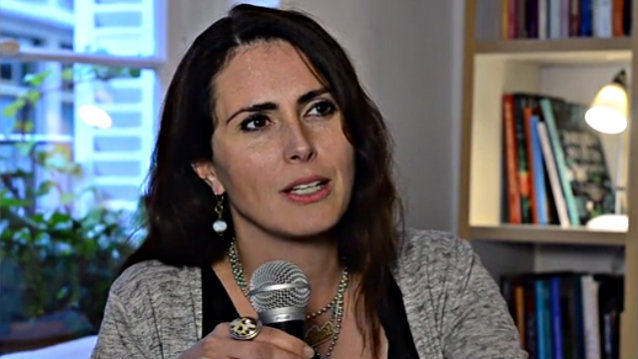 WITHIN TEMPTATION Is Going To Have A 'Very Busy' 2015

Brian Aberback of Patch.com recently conducted an interview with vocalist Sharon den Adel of Dutch symphonic rockers WITHIN TEMPTATION. A couple of excerpts from the chat follow below.

Patch.com: You just re-released the band's debut album, "Enter" (1997),which has been long out of print. What do you think when you go back and listen to the album?

Sharon: It brings back a lot of nostalgia. We had one or two days to do vocals and I was trying to finish the lyrics at the same time. I remember going like a freight train with writing lyrics. We had so many different labels that people gave us, doom metal and then folk metal. I loved PARADISE LOST and they had an opera singer on one of their songs and it was amazing. They were one of the first death metal bands at the time that had melody. Compared to now, there has been a lot of musical development in how we write songs. Our music has also changed in terms of how it sounds and is produced. Our first demo was on a cassette tape.

Patch.com: What can you tell us about the new WITHIN TEMPTATION DVD, "Let Us Burn"?

Sharon: There are two shows on the DVD. The "Elements" show is an anniversary show where we played an arena in Belgium. It was a huge success and we love it. We played with a big orchestra and it worked well because we want to make epic music. It was the ultimate way for us to perform live. The "Hydra" show is more of a club show and we also love playing in more intimate settings so you get to see that part of us as well. Whatever size show we play, when you get on the same wavelength of the crowd it is a magical moment.

Patch.com: How was your first North American tour in seven years that happened the last couple of months?

Sharon: The energy from the crowds was great. People were very excited. We were thrilled. People are doing a great job of spreading the word. Some people flew for a couple hours to the shows and that is amazing. One particular favorite moment came in Philadelphia. There was an 80-year-old man there. We are one of his favorite bands and his two sons drove him four or five hours to see us. You have to seize the moment and go for your dreams, and he was doing that.

Patch.com: What are WITHIN TEMPTATION's plans for 2015?

Sharon: It is going to be a very busy year. We will do a theater tour and a lot of summer festivals in Europe and we are hoping to come back to America to play places we did not get to this year. And we're writing new music at the same time. It is looking to be another fun year.

Read the entire interview at Patch.com.