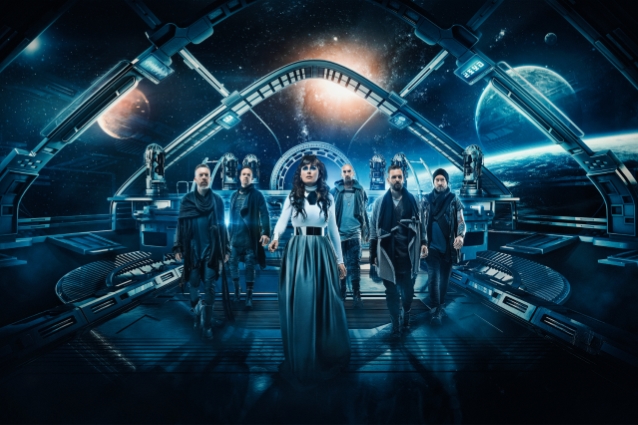 The official lyric video for the song "Raise Your Banner" from Dutch metallers WITHIN TEMPTATION can be seen below. The second single from the band's forthcoming studio album, "Resist", features a guest appearance by IN FLAMES vocalist Anders Fridén.

"Resist" will be released on December 14. It is the band's first release through Spinefarm Records, the specialist hard rock label of Universal Music Group.

"Resist" marks a departure from the WITHIN TEMPTATION's past. The record is armed with 10 anthemic tracks, driven by grand melodies and dark hooks. It brings a futuristic take on metal to the table — both instrumentally and thematically.

"'Resist' is a true milestone for us. If it wasn't for 'Resist', WITHIN TEMPTATION wouldn't be here anymore," the band stated.

"With this record, we've taken inspiration from modern music and gave it a face — a very dark one," singer Sharon Den Adel said. "Sometimes, it feels that today's pop music lacks a rebellious edge. Our main goal was to collect pieces from sounds we did like and roughen it up as much as we could, resulting in a surprisingly new musical world that is heavier, dirtier and more futuristic than we've ever created before. 'Resist' is our take on metal in a new way: to give modern music its rebellious edge."

Regarding the nearly five-year gap between "Hydra" and "Resist", Sharon told Poland's Interia.tv: "It took me a long time because of several reasons. We had a heavy touring schedule with 'Hydra', and we toured a long time. We've been together as a band for such ages, and so when I came back, I didn't have any inspiration. There was a lot of things happening in my personal life, so all that came together and I just couldn't write music. I was very much blocked. I needed for myself to discover if I still wanted to do the touring and also writing music for WITHIN TEMPTATION, if I still wanted to be in the band, because it didn't bring me any joy at the time. I was just not in a very good place at that time. Now, I'm feeling a bit — a lot better, actually, and the strange thing is that I couldn't write because I didn't feel the music. I didn't know where to go. Not just me, but also the guys that I work with find it very difficult to write for WITHIN TEMPTATION, because we didn't have any inspiration. It was not just me, but I had a lot of other issues besides not being able to write. That's why it took a long time, and when I did start writing again, I wrote [a] different kind of music — I wrote singer-songwriter kind of songs, and that's not really WITHIN TEMPTATION material. I needed to get that out of my way, so I made a solo album, and when it did start again — when I did feel the songs coming back again to us, and the inspiration and everything — we wrote this album and recorded it in one year. Last summer until this summer, we recorded it, wrote the songs and produced everything."