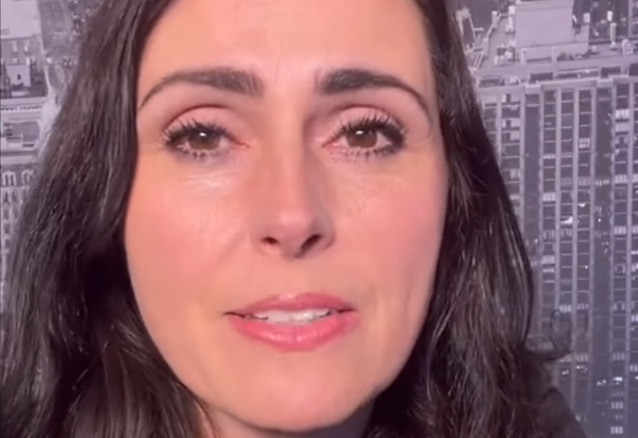 WITHIN TEMPTATION Singer: 'It Was An Honor' To Take Part In 'Save Ukraine - #StopWar' Telethon Concert

Dutch rockers WITHIN TEMPTATION were one of the artists who took part in a telethon concert on March 27 in support of Ukraine. "Save Ukraine - #StopWar" united more than 20 countries and bring together more than 50 participants. The marathon was broadcast from Warsaw on the Polish TV channel TVP. In addition, broadcasters from many countries around the world, including Estonia (EBR),Lithuania (LTR),the Czech Republic (ČT2),Georgia (GPB / First),Albania (RTSH 2),Montenegro, Slovenia, Latvia (LTV),Croatia (HRT),Slovakia (RTVS),Austria (Puls 4),Cyprus, Canada (OMNI) and others, rebroadcasted the marathon on their local channels.

In a new interview with Greece's Rock Overdose, WITHIN TEMPTATION singer Sharon Den Adel stated about her band's participation in the event: "For us, it was an honor to be asked for it. I think as a band and as people, we really value freedom of speech and freedom and democracy. I think as a band, people sometimes say, 'Don't be so political,' people say, 'Don't be so expressive and don't take a side on things.' But as a musician, I think it's important to represent who you are, not just in music but really stand for what you make and what you are saying in your lyrics in a way. And things that are happening in the world inspire us to write music, and then you also have to take a stance and what side you are. I think when it's so obvious where there's an aggressor and where there is a country being violated, invaded, you should take a stance and then it makes it much easier even to be very clear about where you stand in this whole conflict. Of course, it's something that we are keeping ourselves updated with every day because we find it very sad to see that a country that wants to be a democracy is invaded this way. So we are very honored to be asked also to play for this event, this marathon, and happy to do it."

WITHIN TEMPTATION and EVANESCENCE recently announced that their "Worlds Collide" European co-headlining tour will still happen this year. The trek, which was originally planned for 2020 and later moved to 2021 and then to March/April 2022, will now kick off in the fall. All existing tickets and VIP packages will remain valid for the rescheduled dates and all venues remain the same.

Despite not being able to tour, WITHIN TEMPTATION is still moving full speed ahead, having released three singles during the pandemic: "Entertain You", "The Purge" and "Shed My Skin", the latter of which is a collaboration with the German metalcore band ANNISOKAY.

The "Shed My Skin" music video received its official premiere one day prior to WITHIN TEMPTATION's digital show "The Aftermath - A Show In A Virtual Reality", which was held last July.