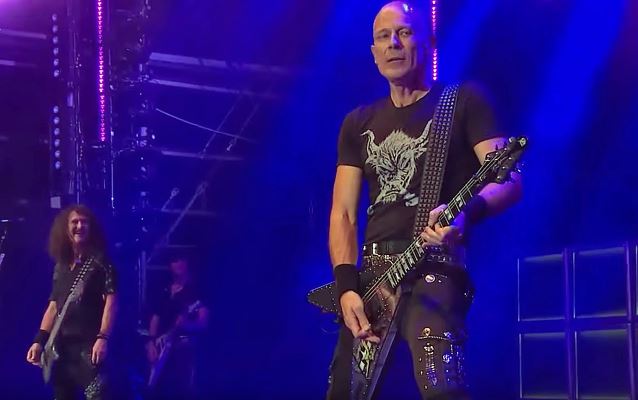 WOLF HOFFMANN Says Next ACCEPT Album Will Arrive In 2017

Robert Cavuoto of Metal Rules recently conducted an interview with guitarist Wolf Hoffmann of German/American metallers ACCEPT. A couple of excerpts from the chat follow below.

Metal Rules: Tell me about the chemistry between you and [bassist] Peter Baltes that keeps ACCEPT going?

Wolf: There is something that just works really well between us. Were like an old married couple. [Laughs] We fight a little, but always seem to work things out. We're a great team. If you know someone for almost 40 years, you don't have to say a lot of things; you just feel alike. That's probably the biggest asset when we get together for songwriting or creative things. We each know what the other guy feels and thinks.

Metal Rules: Looking back at your career, do you sometimes think that you had to go through periods of adversity with [singer] Udo [Dirkschneider] leaving or lineup changes to get the best out of the band musically?

Wolf: Oh God, no. It's just something you just have to live with. I don't think anyone needs that kind of stuff. In the perfect world, this would never happen with anybody. But the reality is that it happens to almost every band. As you go through life, interests change, people change; people start families which change everything. When you start out as a bunch of teenagers, you say, "We are going to be in this band forever and do everything together." That's easy to say, but then 20 or 30 years later, things are completely different and everybody develops their own life. It suddenly gets harder and harder to keep everything together. I'm super fortunate to be in this band for as long as I have been with Peter and playing together. I probably say I have never played with another bass player ever. [Laughs]

Metal Rules: Do you have songs written for the new album or are you going into the studio to start writing?

Wolf: It has always been the same formula for years, where Peter and I jam on ideas, add some scratch vocals then combine it with other elements of songs. We let it sit and simmer for a little while come back to it. It's a piecemeal process that takes shape over a course of many weeks. Very seldom do we write a song after just one go at it. It's always about coming back to it and going over it again and again. Once we have a demo that's worth listening to, and an idea of what the songs is about, we give it to [singer] Mark Tornillo to write the lyrics and put his spin on it. It's meant to be released in 2017. It's always hard to plan these things. We made a mistake a few years back and committed to a date as the tour was booked and then had to scramble to finish the album. It wasn't fun and we don't want to do it again. We just want to work hard until we feel it's ready.