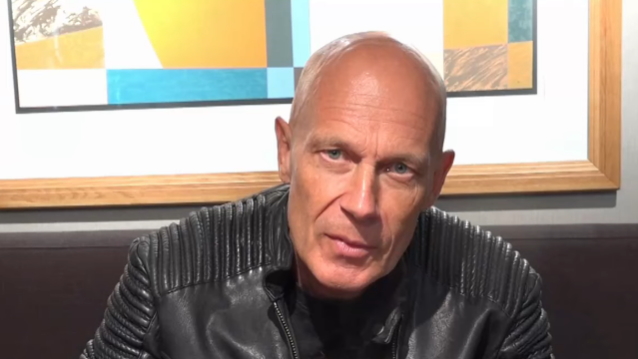 WOLF HOFFMANN: Why ACCEPT Has Gone Through So Many Lineup Changes

In a new interview with the
"Sally Steele Rocks! Show", ACCEPT guitarist Wolf Hoffmann was asked why there have been so many personnel changes in the band over the years. "I'm the big bad wolf. I kick people out just when I feel like it," he quipped (as transcribed by BLABBERMOUTH.NET). "Well, actually, to be halfway serious for a second, it's just the way it goes sometimes. We started off as teenagers in a sort of garage-type band. And people grow up and they get married, they have different interests, and before you know it, one guy leaves the band and a replacement comes, and then the replacement leaves after a while. It's just the way it goes; it's a natural progression. I wish it wasn't that way. People develop different interests and life changes, so people leave. I'm the only guy who's never left. I'm like the last man standing."

Hoffmann is the sole remaining original member of ACCEPT, which he formed in 1976 in the town of Solingen, Germany with singer Udo Dirkschneider and bassist Peter Baltes.

ACCEPT's latest studio album, "Too Mean To Die", was released in January 2021 via Nuclear Blast. The LP was the group's first without Baltes, who exited ACCEPT in November 2018. He has since been replaced by Martin Motnik. ACCEPT's lineup has also been expanded with the addition of a third guitarist, Philip Shouse, who originally filled in for Uwe Lulis during 2019's "Symphonic Terror" tour, before being asked to join the band permanently.

Six months ago, Hoffmann was asked by Greece's Rock Overdose magazine about Dirkschneider's comment that the band's current lineup is "not ACCEPT" anymore because Wolf is the only remaining original member left. The guitarist responded: "Yeah, yeah. Of course. I know. What else is new? Of course he's gonna say that. What else is he gonna talk about? See, that's the thing — if you constantly talk about something that happened 30 years ago, what does that tell you about your own career? That's all I have to say about that. I always think the proof is in the pudding — make some great music and the rest will sort itself out. And that's all we're trying to do. We're not trying to compete with anybody. We don't have to prove ourselves. We are ACCEPT and we make great albums. That's all I know."

In April, Udo said in an interview with Australia's "Scars And Guitars" podcast that he has had no contact with Wolf in recent years. "And I don't wanna have any contact with him," he added. "I'm really good friends now again with [former ACCEPT bassist] Peter Baltes; he did all the bass guitars on [my new] cover album ['My Way'], for example. I still have a good relationship with [ex-ACCEPT drummer] Stefan Kaufmann. Over the years, he was the guitar player in U.D.O. [and] he was producing U.D.O. and stuff like that. And the only guy I don't wanna talk to — let's say it this way — is Wolf. There's a lot of reasons why. I wish him all the best. [He's] a great guitar player anyway, but for me to work with him again — never."

In January 2021, Hoffmann was asked by SiriusXM's "Trunk Nation With Eddie Trunk" if he was surprised to see Baltes working with Dirkschneider on new music. He responded: "Yeah, I probably shouldn't say much about that. Again, I can only speculate what that was all about. At the end of the day, we do our thing, and everybody has to know for themselves what they wanna do. Yeah, let me not say as much about that as I can, please."