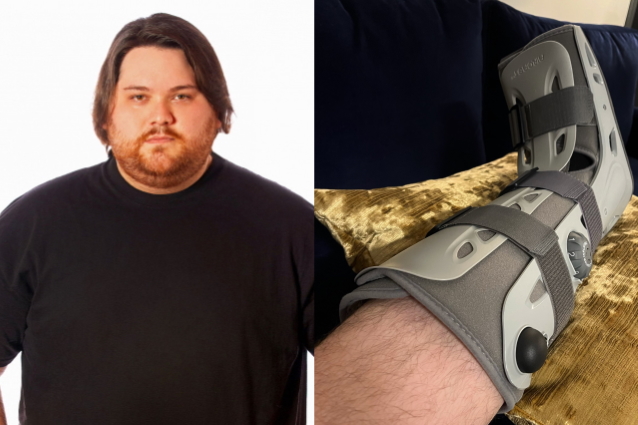 Wolfgang Van Halen will sport a protective boot on his left foot for the next four to six weeks after spraining his ankle.

The 30-year-old son of legendary VAN HALEN guitarist Eddie Van Halen took a bad step getting off his tour bus early Wednesday and injured the foot prior to performing with his band MAMMOTH WVH in Huntsville, Alabama later that night.

Early in the day, Wolfgang took to his Twitter to share a photo of his foot in a boot and he wrote in an accompanying message: "Ate shit walking off the bus this morning and sprained the FUCK outta my ankle. Now I gotta rock this boot for 4-6 weeks.

"Looks like this boot's gonna get some show experience.

He updated fans on his condition Wednesday afternoon.

"Ok soundcheck was ...interesting," he wrote. "Looks like I'm gonna be Dave Grohl-ing it tonight, folks. Be patient with me haha."

Earlier in the month, MAMMOTH WVH guitarist Frank Sidoris and his wife were involved in a serious car accident, leaving the band to perform at its recent shows as a four-piece.

MAMMOTH WVH spent two months on the road as the opening act for the North American leg of GUNS N' ROSES' "We're F'n Back" tour.

Wolfgang wrote all the songs and performed all the instrumentation and vocals on MAMMOTH WVH's self-titled debut album, which came out in June.

MAMMOTH WVH made its television debut in February, performing "Distance" on "Jimmy Kimmel Live!" and running through an exclusive acoustic arrangement on "Today".

Ate shit walking off the bus this morning and sprained the FUCK outta my ankle.

Now I gotta rock this boot for 4-6 weeks.

Looks like this boot's gonna get some show experience.

Looks like I’m gonna be Dave Grohl-ing it tonight, folks.

Be patient with me haha 🙏

Welp… Never done that before, but we pulled it off! 😁

Thanks to Huntsville for making it such a special show!! 🙏

(Also, check out how fucked my ankle is in that 3rd pic 😅) pic.twitter.com/ZKhwUz0yyK

Mom saw Van Halen at the VBC 36 years ago. Tonight we both got to watch Mammoth WVH at the VBC. Hand down the BEST concert I've been to so far🤘🏻