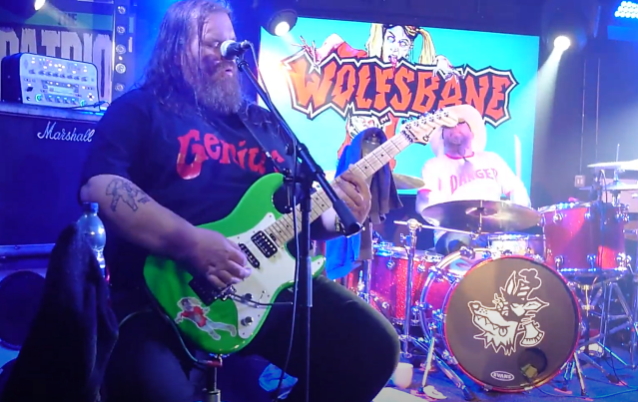 WOLFSBANE guitarist Jason "Jase" Edwards has thanked fans for their "love and support" after it was announced that he has been diagnosed with multiple myeloma, a bone marrow cancer.

The long-running British hard rockers broke the news of Jason's diagnosis in a social media post on Monday (August 1). They wrote: "It is with deep regret we have to inform you that Jase has been diagnosed with multiple myeloma. This is a bone marrow cancer that there is currently no cure for. It is however treatable. He started his first cycle of chemotherapy within 2 weeks of the tour ending and will hopefully go on to have a stem cell transplant in around 4 months' time."

Earlier today (August 4),Edwards took to the band's Facebook to share the following message: "I have been overwhelmed by all the love and support I've received over the last few days about my cancer diagnosis. It really has lifted me immensely to feel all the well wishes from everyone on my personal post and the WOLFSBANE Facebook.

"To feel that level of good feeling towards me and concern has helped me to move forwards with more confidence and purpose. Also hearing people's stories of going through similar experiences, offers of help, advice and support have been inspirational and practically useful as well.

"I know there are people out there, of course, with worse versions of this horrible disease and my heart goes out to them, to people who truly have very little time left.

"I'd like to thank you all for your kind words and lovely messages. I'll be taking all the good advice. Staying positive and doing everything I can to get the best possible outcome from my treatment. I'll stay in my happy place in the studio, where I'll be in a minute mixing an album for an excellent band called ELECTRIC CAKE SALAD.

"I'm Inspired and humbled by all the support! Thank you all again and I'll post from time to time as an update on my condition. In the meantime, I'm still the same person I was before, a music-loving audio professional and fun-loving twat who is now even more determined to enjoy each day as it comes.

"Love to you all

WOLFSBANE's first album in a decade, "Genius", was released in June. The artwork for the LP was designed by Simon "Mackie" Piasecki, who also created the covers for WOLFSBANE's 1990 EP "All Hell's Breaking Loose Down At Little Kathy Wilson's Place" and 1991's album "Down Fall The Good Guys".

WOLFSBANE burst out of the Midlands in the mid-1980s, signed to Rick Rubin's Def American label in 1989, built up a massive following of (self-titled) "howling mad shitheads" (HMS) and released three raucous albums before imploding in 1994, when Bayley joined IRON MAIDEN.

WOLFSBANE reformed in 2011 to record its first studio album for 17 years, "Wolfsbane Save The World", released in January 2012 to huge acclaim.

I have been overwhelmed by all the love and support I've received over the last few days about my cancer diagnosis. It...

Posted by Wolfsbane on Thursday, August 4, 2022