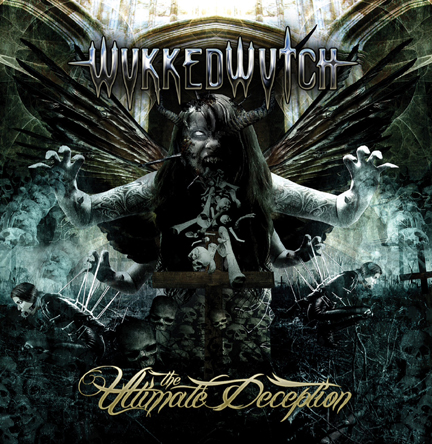 South Florida-based female-fronted extreme metallers WYKKED WYTCH have released their cover version of the METALLICA classic "Fade To Black". You can listen to it using the SoundCloud player below.

WYKKED WYTCH's version of "Fade To Black" comes off the band's fifth full-length album, "The Ultimate Deception", which will be released on February 14 via Goomba Music. The follow-up to 2008's "Memories Of A Dying Whore" "continues where its predecessor left off and pushes the boundaries of extreme music as well as the legacy of WYKKED WYTCH," according to a press release.

Led by the demonic vocal assault of frontwoman Ipek, WYKKED WYTCH's sound is described as "a unique mixture of black, death, thrash metal with melody, technicality, and aggression which has gained them a strong cult following throughout the world."

Regarding the recent signing and forthcoming release, Ipek said, "We are very excited and proud to announce that WYKKED WYTCH has signed with Goomba Music for the release of our fifth full-length album, 'The Ultimate Deception'.

"Over the past two years we worked really hard creating a modern metal masterpiece and with Goomba behind us we will spread the word worldwide. We would also like to thank Mark and the crew at Goomba for this new partnership. It was the right choice for us and glad to know there is an experienced team of industry vets behind the label that respect the integrity of their artists."

"The Ultimate Deception" was recorded in April/May 2011 at Lambesis Studios in San Diego, California with producer Daniel Castleman (AS I LAY DYING, WINDS OF PLAGUE). The CD was mastered by Alan Douches (THE DILLINGER ESCAPE PLAN, THE BLACK DAHLIA MURDER) at West West Side Music in New Windsor, New York. The cover artwork was created by Marcelo Vasco (DIMMU BORGIR, THE FACELESS).

"The Ultimate Deception" includes 10 tracks with a running time of 47 minutes — nine original songs and a cover of METALLICA's "Fade To Black". It marks the recording debut of lead guitarist/songwriter Nate Poulson, who composed nine "badass" tunes that add a whole new dimension and flavor to the band's constantly evolving sound. According to a press release, "the songs are heavy, technical, and melodic with each one standing on its own. Showcased on this release are vocalist Ipek's true abilities that drive the album. Not afraid to take chances, Ipek doesn't hold back and has stepped out of her comfort zone; moving from death growls to high pitched screams to operatic, and clean catchy choruses in the course of a single song. The intense and insane vocals are performed by 'one' woman, not three different vocalists. Also featured is one of the best drummers in metal today, Kevin Talley (DAATH, SIX FEET UNDER, CHIMAIRA) who appears as a session musician and complements the songs with his killer double bass and blast work."