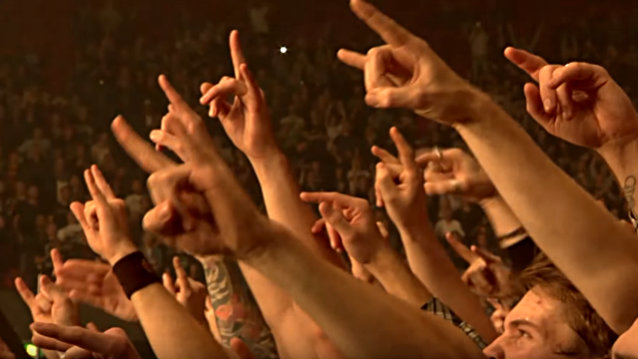 According to a new research, young heavy metal fans are five times more likely to self-harm or attempt suicide.

Researchers from the Universities of Manchester and Liverpool conducted a review of 12 English-language papers published in the British Journal Of Clinical Psychology and found that groups belonging to alternative subcultures are at far greater risk of hurting themselves.

"The belief that alternative subcultures may be at an increased risk of self-harm and suicide is considered by some to be a myth," said Peter Taylor, a clinical psychologist from The University Of Manchester. "But the literature we reviewed does suggest that these individuals are indeed in greater danger. However, this research requires interpretation within the wider context of public concern around alternative subcultures and their impact on the mental health of young people."

He added: "We're not saying that doctors should be worrying about everyone wearing a METALLICA t-shirt, but if there are also other signs which point towards self harm, then they definitely ask the question.

"Many people become affiliated with these groups because they feel like they don't fit into society and so face a lot of vulnerabilities. But there also might be victimization and stigma associated with belonging to these subcultures."

The studies that explored the association between music preferences and self-harm or suicide focused on the heavy metal genre, which in some studies also included other genres under this term; alternative, punk and classic rock and rock, metal and punk. Comparison analyses and factor analysis highlighted similarities between the grouped genres. Five studies investigated the links between a preference for heavy metal music and self-harm and one focused on completed suicide. Findings indicated that there were small positive associations between a preference for heavy metal music and increased self-harm; namely suicidal ideation, past suicidal ideation and suicide risk, including attempted suicide and suicidal ideation. Furthermore, higher percentages of heavy metal fans (31-74%) reported suicidal thoughts in comparison to non-fans (14%-35%).

The findings across several studies that participants who identified with alternative subcultures (through self-identification or music preference) also had experiences of adversity, including bullying or victimization, difficult family relationships and prior emotional and/or behavior difficulties, provides some support for the suggestion that they are a group that may have pre-existing vulnerabilities to self-harm. However, despite this potential link, several studies found that the relationship between alternative affiliation and self-harm continued to exist after these confounding variables were controlled for. These results appear to work against the hypothesis that the association between alternative subculture affiliation and self-harm results solely from a shared vulnerability. That said, one study found that after controlling for correlates or predictors of self-harm, the association of alternative music preference and self-harm became insignificant and other studies found a reduced effect size following adjustment for confounders. These studies indicate that pre-existing experiences of adversity (e.g. bullying, depression) do contribute to self-harm, as found in the general research.

"There is not enough evidence to tell us why it is that people belonging to these subcultures are at greater risk," said Mairead Hughes from The University Of Liverpool.

"Young people who have faced more adversity may be more likely to become part of a subculture, but this does not seem to fully explain the increased risk," Hughes said. "Stress associated with being different and belonging to a minority group may also explain some of the risk."