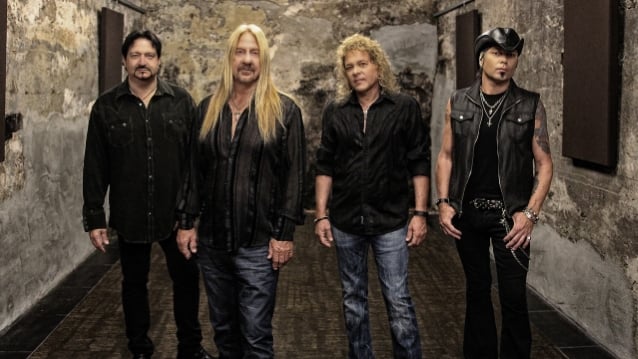 In an interview with the "Growin' Up Rock" podcast, legendary Y&T frontman and guitarist Dave Meniketti confirmed that the band's long-awaited documentary, "On With The Show", will arrive before the end of 2019. "Well, we don't have a specific date, but we know that we're gonna release it this year," he said (hear audio below). "We've been trying to put the screws to the guys that have been doing this for years. And they keep getting more and more material, and keep getting more and more material, and the thing was growing and growing by leaps and bounds. At one point, it was seven and a half hours long. So, we just told them absolutely without any expectations other than this, 'You have to have it done by this date this year, and it's got to be done. And if it isn't done, then we're gonna hire somebody else to come in and finish it.' So, in other words, we let them know, in no uncertain terms, it has to be done by this time and released before the end of the year. So that's exactly what they're doing."

Meniketti continued: "When we came home from our U.S. tour at the end of March, we all had to get together at my place and watch the very first cut. Now, that first cut was three and a half hours long. So we were gonna take notes and we were gonna tell 'em what we think should be cut from that, give 'em an idea of how they can take another hour-plus off of it. And we've already now seen a second cut, and the second cut was two hours and 15 minutes, and then [we] told them what [we] thought should be cut here and there. And they're pretty much right around the two-hour thing right now. So it's really just down to some sweetening and putting in the voiceover stuff, which Eddie Trunk is doing. So Eddie has to record that part, and they have to lay it in there. And then it's just a matter of laying in all the rest of the music that goes in and around it, and then we're off to the races."

This Kickstarter-funded video project has tested fans' patience. Meniketti acknowledged the Y&T supporters' grievances and seconded them, saying: "It's frustrating as hell, 'cause we're not involved in doing it. And I think a lot of fans think that we are doing it somehow, and, of course, a lot of 'em get mad. And they're just, like, 'What is taking so long?' and so on and so forth. 'Cause some of these people gave us money in advance with Kickstarter, and they're, like, 'What are you doing with our money?' And I wish I could tell 'em that I could help them out, but we let these guys do their own thing, because we wanted them to finish it. Because they put so much of their heart and soul into it for so long of a period of time, we'd hate to just take it away from them at the last minute. So they're doing a great job. And it'll get done this year and out. I don't know exactly when it's gonna be out, but it will be out before December 31st, I guarantee you that."

"On With The Show" is expected to contain commentary from a number of other artists, including Don Dokken (DOKKEN),Dee Snider (TWISTED SISTER),Sammy Hagar (VAN HALEN, MONTROSE),Eric Martin (MR. BIG) and the members of ANVIL. The film is being built out of the hundreds of hours of personal footage shot over the years. It is set to cover the band's earliest days of rehearsing in drummer Leonard Haze's grandmother's house, then move through the first two albums, touring with JOURNEY, BOSTON and QUEEN, to their big breaks with AC/DC, OZZY OSBOURNE and DIO.