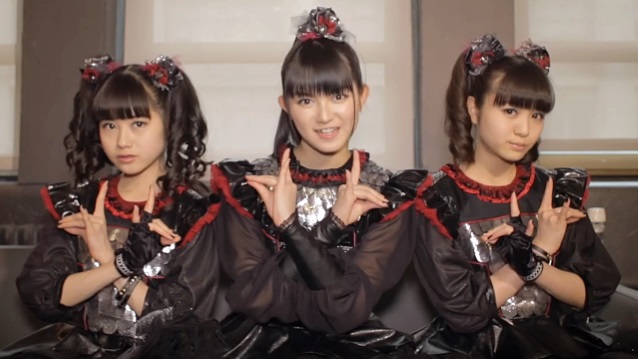 YUIMETAL 'Remains A Member Of BABYMETAL'

A spokesperson for BABYMETAL's American management company has confirmed Yui Mizuno (a.k.a. Yuimetal) remains a member of the Japanese pop/metal group.

After Yuimetal was a no-show at the first two concerts of BABYMETAL's current U.S. tour, fans took to social media to question her absence. The rumor mill went into overdrive after Suzuka Nakamoto (a.k.a. Su-Metal and Moa Kikuchi (a.k.a. Moametal) performed live as a duo (along with two onstage dancers),and no bandmembers appeared in the video for BABYMETAL's new single, "Distortion".

When contacted by Alternative Press for an explanation, a 5B Artist Management representative released a statement saying that "Yuimetal remains a member" of BABYMETAL, despite the fact that "she is not on this current U.S. tour."

The group's spokesperson added: "There is a new narrative for the future of the band which is currently evolving. The storyline has changed. This was the basis of the 'Metal Resistance Episode 7: The Revelation' video."

The representative went on to explain that the seven hooded figures in the bombastic clip represent a new era for the band, with the addition of new characters. "The who, when, where, and how of The Chosen Seven will be presented as the concept unfolds," the spokesperson said.

Last December, Yuimetal was forced to miss BABYMETAL's two shows in Hiroshima after being taken ill.

BABYMETAL's current trek will include appearances at some of the most recognized festivals in the world, among them Rock On The Range (U.S.),Rock Am Ring, Rock Im Park (Germany) and Download (U.K.).