Guitar icon Zakk Wylde today has announced new U.S. and Canadian tour dates in continued support of his new LP, "Book Of Shadows II". Wylde will hit over 40 cities spread out across the U.S. and Canada this summer including a performance at Heavy Montreal festival in Montreal on August 7, a first for him as a solo artist. Tickets will go on sale this Thursday, May 12. TYLER BRYANT & THE SHAKEDOWN and Jared James Nichols will serve as support.

Wylde, as always, has been on the road nonstop. He wrapped up a buzzworthy stint on Steve Vai's "Generation Axe" tour just yesterday in Red Bank, New Jersey and prior to that served as a marquee artist on the "Hendrix Experience" tour with the likes of Billy Cox and Buddy Guy. This is the first time Zakk has toured as a headliner in the U.S. and Canada since last year's "Unblackened" tour.

Wylde feverishly worked on new material since he wrapped up BLACK LABEL SOCIETY's "Unblackened" spring tour last year. All songs on "Book Of Shadows II" were recorded and produced at Wylde's home studio, The Black Vatican, where several of Wylde's recent releases were made. The artwork was created by Wylde and longtime collaborator John Irwin. 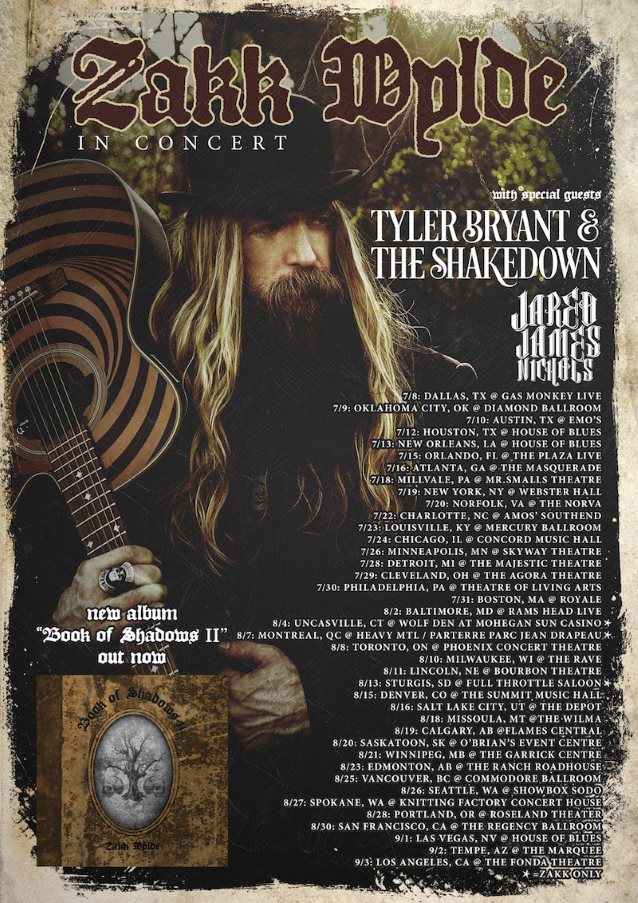