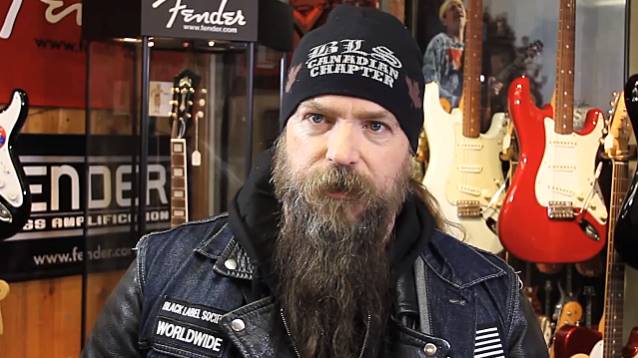 Anthony Toto of Pop-Break.com recently conducted an interview with Zakk Wylde (BLACK LABEL SOCIETY, OZZY OSBOURNE). A couple of excerpts from the chat follow below.

Pop-Break.com: What's your take on the state of modern guitar playing in rock and metal? I know you're a big fan of Synyster Gates from AVENGED SEVENFOLD.

Zakk: I think it's great that AVENGED SEVENFOLD is having all this success; it's awesome for the whole rock community in general. He's the torchbearer for the young kids now to play solos, learn the scales, and develop a feel. The same thing with Randy [Rhoads, former OZZY OSBOURNE and QUIET RIOT guitarist], aside from the amazing songs and solos, he always made it cool to want to learn so you're knowledgeable with the guitar. He made having wisdom with the instrument cool.

Pop-Break.com: I think it's admirable to show your support and leave the door open for Nick Catanese and former BLACK LABEL SOCIETY members. I imagine you've seen the ugly side of the industry where bands eat themselves up with inflated egos. I don't think it's a coincidence that a positive attitude keeps this band moving forward

Zakk: Absolutely, we all love Nick and he will always be a BLACK LABEL brother. When I called him up to do the new record, he told me that he wanted to keep working on his new project and I just said, "Nick, that's awesome. We love you, kick some ass and keep doing it brother." That's just the way we roll. We're like a bunch of Navy SEALs; we know why we're here and why we're getting together. We're going to go kill some bad guys and than we're going to come back home. There is no bitching or whining. We all genuinely enjoy hanging out with each other. I love every one of those guys in BLACK LABEL because they are like brothers. They are all unique and each brings their own flavor to the soup. It's just like how Derek Jeter's going to retire now, the Yankees will retire his jersey and put his name out in Monument Park and then we're going to welcome in the new shortstop. Hopefully, we're going to retire his jersey down the line because he meant that much to the team. Everybody enjoys being here.

Pop-Break.com: So far, how have you seen yourself work with (new guitarist) Dario Lorina? Having a young guy enter the world of BLACK LABEL SOCIETY, how's the chemistry coming along? What do you see him bringing to BLACK LABEL SOCIETY in the future?

Zakk: I guess it's like when I joined Ozzy, all the guys I was rolling with were in their 40s. It's pretty much the same thing. We don't haze or bully anybody, I don't believe in any of that bullshit. The reason why you're here is because we want you here and you belong here. Dario's a monster guitar player and he's super cool. We love having him and you couldn't ask for anything more.

Pop-Break.com: From the sound of "Catacombs Of The Black Vatican", your singing has definitely matured over time and I'd say some of these new tracks showcase the best vocal work of your career. How do you approach your vocals live and in the studio?

Zakk: I think it's just a matter of the more and more you do it, you're bound to get better. That's what you strive for anyway. If the last record was a 500-pound bench press, you're looking to go in there and put up 505 or 525. If we lifted 525, that's great. I'm playing sports like a kid; you're trying to outdo what you did last season. Even if we won the Super Bowl, you and me as the owner and general manager of the team, we're still figuring out and looking for ways to upgrade the team for next year. That's just the way I'm wired. I love sports but music isn't sports in that regard. Someone might say, "Even though 'Led Zeppelin IV' is their biggest selling album and the production, songwriting, and performances are amazing," someone else might say, "I like 'Presence' better than all of them." Now, you're talking about art. I have some friends that like the Van Hagar years better than the Dave [Lee Roth] years and you and me might like the earlier records. If someone asks me, "What's your favorite VAN HALEN record?" I'm, like, "''Fair Warning' is the best," but some of my other friends will say, "The Sammy stuff smoked that shit. '5150' is their best." It's all subjective because it's music and music isn't bench pressing. If we're talking about PINK FLOYD, "Which album do you like better? 'The Wall' or 'Dark Side Of The Moon'?" I guarantee that if there were 20 of us sitting in the room, it would be amazing to see how many different opinions you would have about which album is better. In sports though, whoever benches the most is the winner. [laughs]

Read the entire interview at Pop-Break.com.