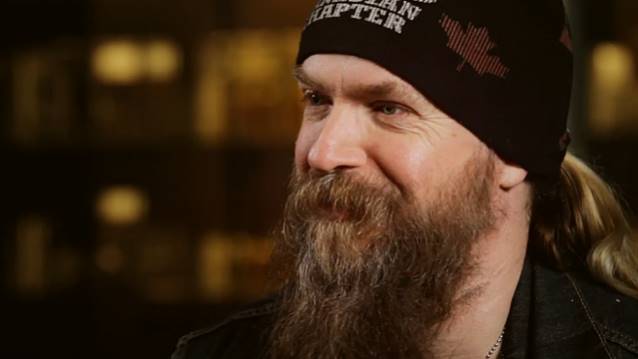 Niclas Müller-Hansen of Rocksverige.se recently conducted an interview with Zakk Wylde (BLACK LABEL SOCIETY, OZZY OSBOURNE). A couple of excerpts from the chat follow below.

Rocksverige.se: Do you think that had you gone on doing what you were doing, drinking-wise, you could've ended up like [Oscar-winning actor] Philip Seymour Hoffman [who died of an acute mixed drug intoxication, including heroin, cocaine, benzodiazepines and amphetamine]?

Zakk: I don't know. It's sad. I guarantee you that he just thought he'd do that and then be fine. I don't think it was suicide or anything. It's just really sad. I never drank because I was depressed or anything like that, I always had a good time. When I was 42, they told me that I would either die or I could just stop. When I had my blood clots, I went to the doctor and said, "Doc, do I have to like chill out on the sauce?" and he said, "We'll put you on blood thinners. How much do you drink?" I told him, "I drink every day." And he just told me to stop. You don't wanna go to Hooters, watching a game and start bleeding out of your schlong, your ass… The doctor told me that it was like I had a quarter of a tank of gas in my car and I was trying to go 500 miles. There was no way I was gonna make it. He said, "By your 47th birthday, I'll bet my house you won't be here." And I was, like, "That sucks!" and then he went on: "You have door number one and that's a liver transplant and that's a pain in the ass and will definitely change your life. Door number two is the pancreas thing. We don't really have that down now, as good as the liver transplant. Most guys die on the table. They'll have their friends come in and say goodbye to them, because they're not going home, or you have door number three, you can hang out and listen to your LED ZEPPELIN records, watch porn, hang out with your family and do whatever. Does the drinking mean that much to you?" [laughs]

Rocksverige.se: [BLACK LABEL SOCIETY's] new album then, "Catacombs Of The Black Vatican". When making a new album, do you go at it thinking you'll take it in a certain direction or does things just happen by themselves?

Zakk: It was four years between "Shot To Hell" (2006) and "Order Of The New Black" (2010) and then four years between that one and the new one. It's not like I'm stockpiling riffs. The only songs we had when we went into the studio were "Angel Of Mercy", because I wrote that one the piano and then it was "Shades Of Gray". I only had the melodies and not the titles or lyrics and I had two or three different versions of how was singing it. That was one of the last ones and "My Dying Time" was the last one that I sang. After we got done with the Gigantour, we had, like, 25 days to make a record. I would get up in the morning, have some Valhalla Java, go out to the garage, turn the Marshall on, turn up the volume and reverb so it sounds like I'm playing Madison Square Garden, and then just start playing riffs. It's just riffs and riffs and riffs and then some more riffs. If you listen to SABBATH and ZEPPELIN, it's just riffs. Everything is riffs. You also have chord songs, but SABBATH and ZEPPELIN is all riffs, like "Kashmir", "Into The Void" and "Snowblind". If I can't write songs on two strings, I'm not doing it. Basically you're just stockpiling riffs and it's a lengthy procedure, but it's worth it. It's all for the art. laughs] The title comes from the studio, The Vatican and it's BLACK LABEL SOCIETY, so it's the Black Vatican. The catacombs are the songs.

Zakk: Blasko [OZZY OSBOURNE bassist Rob Nicholson] turned me on to him. He said, "I know a guy named Dario. He's an awesome guitar player and a young kid." I said "Cool, let's check him out!" We saw that he could play his ass off. He came out and we had him do the Chippendale dance routine and after we saw him dance, that's when I knew we had our guy. [laughs] It seems to be working out well. He can play his ass off and it's his gig 'till he doesn't wanna do it anymore. Nick is working his ass off on his own stuff. That's the great thing with BLACK LABEL SOCIETY — guys can come and go and it's a brotherhood. If someone says you have the opportunity to go play with Celine Dion in Las Vegas for the next two years and they're paying you a king's ransom, you gotta go do that!

Rocksverige.se: Are you planning on doing any more books?

Zakk: Well, all I gotta do is jump onboard the submarine (tour bus) and start rolling. The thing is that I don't come up with those stories, they just write themselves. I breathe and I live, my friend, and that's all you need to do in order to get a complete pallet of comedy each and every day. [laughs] I was just down at iTunes the other day and saw some friends. In the music business, there are so many unimportant people making important decisions. Someone said about Sarah McLachlan, "If we had Sarah flash her tits more and get her ass out, like Miley Cyrus…" and I'm like "Shut the fuck up! Dude, all Sarah's gotta do is sit behind a fucking piano. Shut the fuck up!" and it's, like, "I just thought it would be good for her career." and I go "That's why I have no idea why the fuck you have a job!" [laughs] "And who invited you, man?" These are the same people that when ZEPPELIN was around and it's 1976-77 with the SEX PISTOLS and THE CLASH and everything's going on, and it's just, like, "You know, maybe if we put Robert Plant into something green and Jimmy Page got some piercings and tattoos and shaved his head?" It's, like, "And you get paid to work here?" [laughs] "All LED ZEPPELIN needs to do is keep making ass-kicking records! They don't give a shit what the fuck Sid Vicious had to fucking say, nor does it matter what Sid Vicious had to say about LED ZEPPELIN." These are people that have jobs and I just go "You gotta be fucking kidding me?"

Rocksverige.se: You just turned 47. How do you feel about getting older?

Zakk: Someone brought me a picture to sign and on it I was, like, 22 rocking out on stage with the boss (Ozzy). Do I wish I was 22 again? No! It was fucking awesome back then, but it's fucking even more awesome right now. I don't sit here and go, "Wow, I wish that was still going on!" We went to see Robert Plant in Santa Barbara and the show was fucking slamming! Does he wish "The Song Remains The Same" and all that was still going on? No! He's got a lot of other stuff going on. Those days were awesome days, beyond awesome, but he's doing this now. I remember my mom saying to my niece, sitting around the kitchen table and it was fucking scary, but she said, "When you graduate, hold on to it, because those are the best years of your life!" and I was just, like, "That's pretty fucking sad! High school, the best years?" I couldn't wait to get the fuck out, so I could leave and get on with my life. To start doing what I really wanna do.

Rocksverige.se: When you gave your demo to Dave Feld, who then later gave it to photographer Mark Weiss, who gave it to Ozzy, if you hadn't done that, do you think you still would've made it out to L.A. eventually?

Zakk: Yeah, we always talked about doing that. I have all these musician buddies that are all still playing music and just because they didn't get to Madison Square Garden, it's still in their DNA and you bleed fucking music. That's what you do. It's not a hobby, it's part of who you are and it completes you. If that hadn't happened, we'd have a music store, we'd teach, we'd have our own cover band and play all the cool shit and play weddings and shit. Record our own originals. Everything we do would be based around us playing fucking music. Whenever I had day jobs, like when I was working at the supermarket or when I was pumping gas or mowing lawns, that was never a career goal. Every hour and every lawn I moved, I was just that much closer to getting that Gibson Les Paul. We'd be doing music one way or the other. I meet my old friends and I go, "Whatever happened to Andy? He was an amazing drummer!" and they go "He doesn't play anymore. He sold all his shit and he's married now." And I just say, "Oh wow, that's sad!"