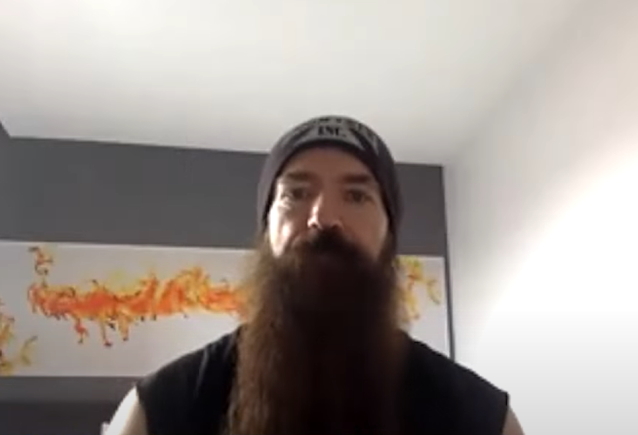 BLACK LABEL SOCIETY and ANTHRAX are set to kick off a joint North American tour, with support from HATEBREED. In advance of the outing, BLS frontman Zakk Wylde and ANTHRAX guitarist Scott Ian got together via Zoom to discuss life on tour for Consequence's "Two For The Road" series.

Wylde checked in from BLACK LABEL SOCIETY's tour in Europe, while Ian signed on from his home in Los Angeles, as the two discussed the upcoming tour, their favorite pizza places, their memories of touring together when ANTHRAX supported OZZY OSBOURNE in 1988, what it takes to grind it out in the music industry, and more.

Wylde said (as transcribed by BLABBERMOUTH.NET): "People go, 'Oh, Zakk, you got any advice to give my son or my daughter or whatever about being a musician?' And I'm, like, either get in a van and start building your mom-and-pop shop now, and build your ANTHRAX, build your BLACK LABEL, build your SOUNDGARDEN, build your LED ZEPPELIN, build your [BLACK] SABBATH, build your FLEETWOOD MAC — whatever it is you love.

"I was talking the other day. I was doing an interview and I go, 'Things are different now.' But I go, 'You cannot stop driven people,'" he continued. "What I'm saying is if Arnold Schwarzenegger never became Arnold Schwarzenegger, the body builder, Mr. Olympia, and all that stuff, and then became a movie star and did all the action movies, if that never happened, if he owned a donut coffee shop in Austria, it would be the most popular donut coffee shop. He would be successful and have nice things. What I'm saying is he would go, 'I refuse to be miserable.' … Jimmy Page looked at success… 'Cause he's the same age as THE [ROLLING] STONES and THE BEATLES. He was like a bird in a cage watching them flying around outside, looking and going, 'I definitely want… I can taste that from here. And I'm gonna have that.' And then he had to wait his turn. 'Cause they made it in '62, and he just bid his time until he got the right guys around him and then it was time for him to do it… After THE YARDBIRDS, he was, like, 'All right. What am I gonna go? 'Cause I want some of that. And I'm gonna figure it out. I'm in the middle of the ocean right now. I can't see land anywhere and I don't have a compass, but I will find land.' There was no quitting him. He was gonna figure out how to make this… 'I'm gonna will this thing to become successful.'"

Regarding how the music business has changed over the last few decades, Wylde said: "Yeah, it's definitely changed, and it always is evolving. From when Ozzy [Osbourne] started, from watching Elvis [Presley] to THE BEATLES to when SABBATH [was around] to when he had to start with Randy [Rhoads] again to where it's at now.

"When BON JOVI was the biggest thing on the planet when 'Slippery When Wet' hit, and being from [New] Jersey, if you didn't make it by the time you were 30 years old and had a record deal, the dream was over, bro. It really was," he said. "You might as well get a real job — as in something you're miserable [doing] and can't stand. It's over; the dream's over. But nowadays, you can literally put our… We can put our stuff up on YouTube and start our own mom-and-pop shop and start building the empire — each day put another brick on and another brick and another brick and another brick and just keep building it. Which I think is great for all bands, especially the younger bands or anybody that… if you're not getting signed."

BLACK LABEL SOCIETY and ANTHRAX's month-long trek kicks off Tuesday (July 26) in Phoenix, Arizona, and runs through an August 28 show in Philadelphia.