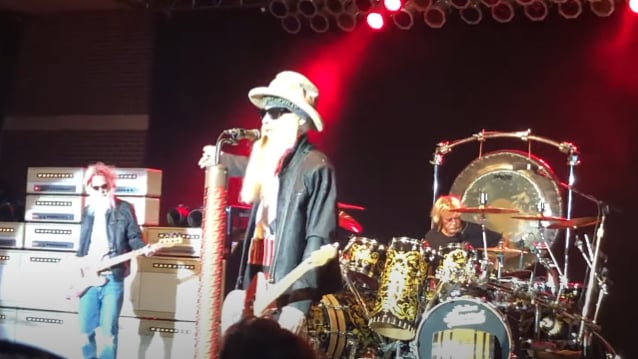 ZZ TOP played without bassist Dusty Hill last night (Friday, July 23) at the Village Commons in New Lenox, Illinois after he was forced to return to Texas to address a hip issue. Filling in for him at the gig was longtime guitar tech Elwood Francis.

A few hours prior to the gig, ZZ TOP frontman Billy F Gibbons said in a statement: "And with Elwood to our right, rest assured ZZ TOP will deliver their good-time signature show. Billy's big guitar, crushing drums from Mr. Beard, and Elwood securing the bottom end continues the delivery with those famous three chords we all dig."

On Wednesday (July 21),ZZ TOP canceled its concert in Evansville, Indiana because of a "health issue within the band," according to local news outlet Evansville Courier & Press.

ZZ TOP kicked off its latest tour less than a week ago in Manchester, Iowa. The trek, dubbed "A Celebration With ZZ Top", continues in August with dates in the South, Midwest and Far West. Fall finds the legendary trio, who were inducted into the Rock And Roll Hall Of Fame by Keith Richards of THE ROLLING STONES, playing dates in the East, South and in their native Texas. A residency at The Venetian Theater in Las Vegas that had been postponed from last year is now set to start in early October. Looking ahead to 2022, a coast-to-coast Canadian tour has been announced for April and May.

Gibbons recently told Classic Rock magazine that he and his bandmates were working on ZZ TOP's 16th album after he had completed work on his latest solo LP, "Hardware". "The last laugh has yet to be heard," he said. "While we were working on 'Hardware', I was sending the roughs that might not have been fitting for that but were certainly fitting for the ZZ thing. I get to tiptoe out of 'Hardware' and back into ZZ, which is underway now."

The members of ZZ Top, Billy, and Frank, would like to share that Dusty, their fearless Bass player, is on a short...