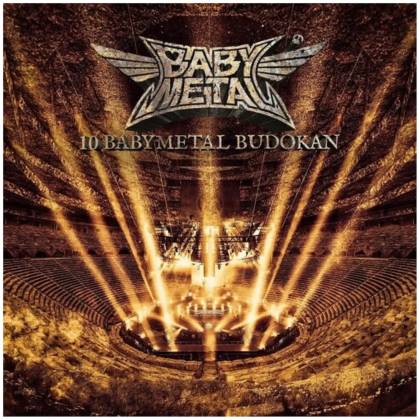 The metal world is roughly divided into two camps: those who think BABYMETAL are a splendid and wildly entertaining force for heavy metal joy, and those who would rather have their limbs sawn off with a rusty Samurai sword than ever hear the Japanese crew's pop-metal hybrid again. A thunderous encapsulation of the BABYMETAL live experience, captured at Tokyo's legendary Budokan, "10 Babymetal Budokan" is not aimed at the latter camp. If you haven't been won over by the exuberant, skewed silliness of the whole enterprise yet — or by the startling brutality and precision of the music itself — then a 70-minute live album is definitely not going to change your mind. But for everybody else, this is a stupidly entertaining reminder that BABYMETAL transcended novelty status through sheer persistence. Omnipresent on stages around the world for much of the past decade, and at many high-profile festivals in particular, they have conquered more than enough metalhead hearts and minds to ensure a few more years of prominence at the very least.

And, of course, Japan adores them. "10 Babymetal Budokan" is a great sounding live record, and one with the constant hiss and squall of a rabid audience bubbling away in the background. After the crushing meet-the-band death metal stomp of "BABYMETAL DEATH" (always capitalized for extra impact!),Su-Metal's unsung brilliance as a vocalist is the first thing that hits the ears, as her band let rip with a nonstop torrent of certified showstoppers, all far heavier than grumpy naysayers would care to admit and played with ruthlessly contemporary tech-metal precision. A greatest hits set in all but name, "10 Babymetal Budokan" really does feel celebratory, from its raucous crowd participation to extended, crowd-baiting versions of some of the band's greatest songs. As anyone that has seen BABYMETAL in the flesh will attest, lengthy, explanatory pre-ambles are also an essential part of the experience, and all of that Fox God mythology remain intact here, adding greatly to the spirit and vibe of this album as a result.

What the fans want, the fans absolutely get. From that unforgettable debut album, the likes of "Gimme Chocolate!!" , "Doki Doki ☆ Morning" and "Megitsune" sound as fresh and cheerily subversive as they ever did. From 2016's bombastic follow-up, "Metal Resistance", the tear-stained grandeur of "THE ONE" and the insanely catchy "KARATE" stand out as euphoric peaks; while a fiery "Distortion", featuring ARCH ENEMY's Alissa White-Gluz having an absolutely brilliant time, goes off like a billionaire's penis-rocket.

Let's face it, superficial gimmicks seldom last for a decade. BABYMETAL have stayed the course for many reasons, but principal among them is the fact that heavy metal is more than robust enough to withstand this kind of mischievous reinvention. "10 Babymetal Budokan" is a thing of joy and wonder. Another decade, you say? The Fox God will not be betting against it.