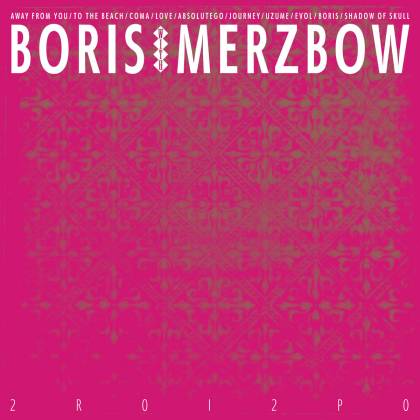 "2R0I2P0" is seemingly a random collection of alphanumeric characters at first glance, but each alphabetic letter splits the numerical digits to essentially stand for "2020 Rest In Peace." Similarly, the pairing of artists that collaborated to create "2R0I2P0" are seemingly out of sync, but the long-running creative union between the psychedelic drone / doom act BORIS with the mind-numbing noise merchant MERZBOW definitely makes sense given proper consideration. Both Japanese acts are inclined toward the avant-garde and extreme expression, and they've both been absurdly prolific, having released a slew of albums, collaborations, compilations, splits and singles. This artistic symbiosis has proven to be much more than a flash-in-the-pan flirtation, as "2R0I2P0" is their eighth collaborative effort and fifth collaborative studio album. The results are rich and grand for those who appreciate extreme music that colors outside of preset lines.

"2R0I2P0" differs immensely from the collaborative's previous release, 2016's "Gensho". That album was divided into two parts: one disc of music from BORIS, the second disc featuring music from MERZBOW. The two discs were intended to be played simultaneously, in the same way that BORIS's double album "Dronevil" was designed, or separately as individual pieces. With "2R0I2P0", however, MERZBOW uses his electronic tools to carve BORIS's quirky heavy metal songs into surreal sonic sculptures reminiscent of, yet clearly distinct from, the source material.

The skeleton parts that electronic madman Masami Akita, the mastermind behind MERZBOW, has reassembled into new beings come from BORIS's 2019 album "Love & Evol" (stylized as "LφVE & EVφL"). Additionally, "Journey" is a harsh revisioning of the soothing track they contributed to a lesser-known split with pop-influenced act THE NOVEMBERS that injects a sense of insanity without betraying the original version's beauty. And the song "Boris", the inspiration for the band's name, is culled from the MELVINS' classic doom album "Bullhead". This take on the song retains the magical lo-fi, rocking simplicity of the original, juxtaposed here with an increasingly unnerving electronic assault.

"2R0I2P0" certainly isn't for everyone, and neither is the entirety of the BORIS and MERZBOW collaboration. The noisy element will surely alienate many, and some heavy music fans might simply not know what to make of it. But for those appreciative of experimental heavy music, "2R0I2P0" is incredible. There is so much going on that numerous listening sessions are required to even begin to grasp the power and energy of the brilliant, combative musical relationship at hand.