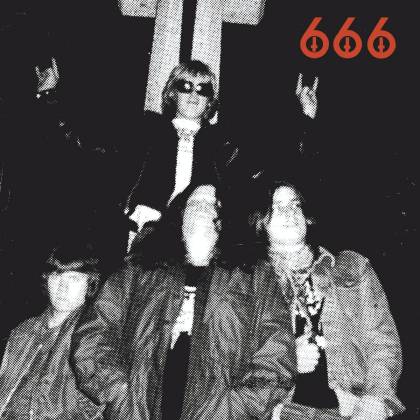 The official consensus on black metal's evolution tends to focus on the contributions of VENOM, BATHORY and then, perhaps most definitively, MAYHEM. And rightly so, of course. But there are always missing links lurking in metal's obsidian shadows, and Norway's 666 are definitely worth a lot more than a footnote. Pre-dating MAYHEM by a couple of years, but only existing between '82 and '83, this Tromsø crew drew heavily and unashamedly from MOTÖRHEAD and VENOM, inadvertently bridging the gap between those bands' rock 'n' roll primitivism and the macabre and blasphemous extremity that was looming over a bloody, fire-damaged horizon. Not that 666 ever sounded remotely like a band with an agenda beyond making a horrible racket. These songs are as simplistic and straightforward as they come, captured as they are in the most lo-fi of sonic states. 666 never ventured into a studio during their brief existence, so what is left are raw and ragged live performances, presented at not-quite-demo quality, but delivered with the kind of snotty zeal that only teenage diehards can truly muster.

The best songs are up there with the VENOM, MOTORHEAD and TANK records that the band were obviously consuming with great alacrity: "666" is a suitably grim and relentless theme song, "Lucifer" repeats the same trick with even greater spite and brevity, "Alkohol" is all Lemmy rasp and DISCHARGE clatter, Tom Arne Hermansen barking and belching like a bilingual Cronos. Best of all, "Ledera" gives the NWOBHM blueprint a jolting dose of bad speed, lurching and flailing like md-PCP binge BLUE CHEER, as subtle as a brick to the face but, thankfully, a lot more enjoyable.

Realistically, this is the kind of unearthed treasure that will only appeal to metalheads with a taste for the ineffably raw. For much of this collection, snare drums sound like biscuit tins and guitars sound like indignant wasps in a bean can. But there's just enough dark magic floating around these brutish, raging bursts of rock 'n' roll fury to ensure that the link between this early Norwegian outbreak of chaos and black metal's eventual redefinition is plain to hear. Pleasingly, the band are believed to have reconvened a few years ago, so this could be the ideal way to herald their wholehearted return.