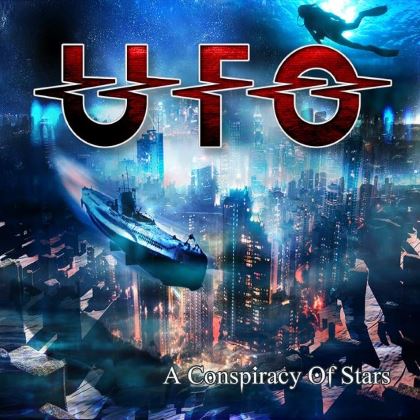 A Conspiracy of Stars

All seems right in the UFO-verse, be it in-house or external of the many alumni who continue to make music. Michael Schenker's riding a high with his TEMPLE OF ROCK, while Pete Way has been successfully battling prostate cancer and planning a road jaunt with his postponed solo album, "Walking on the Edge", reportedly to follow. Continuing to hold it down for Way on bass in UFO is Rob De Luca as the band closes in on five decades of activity. Phil Mogg, Andy Parker and Paul Raymond soldier on with Vinnie Moore, now in his twelfth year with the band, plus De Luca, on their rock solid twenty-first album, "A Conspiracy of Stars".

The groovy riffs opening "The Killing Kind" are an instant grab and the song catches stride with Andy Parker's bruising rhythm. Phil Mogg's sage vocals are turned up louder, which does the song service, but it also smothers it a bit. Still, to be doing what Mogg's been doing forever, and with conviction, is as inspiring as Vinnie Moore's exuberant guitar solo and Paul Raymond's peppy organs on "The Killing Kind". As the chomping riffs of "Run Boy Run" begin, Moore leads the way with Paul Raymond and Rob De Luca's fisting melody and Andy Parker's snapping groove. Again, Mogg delivers a dominant performance, albeit he's slightly behind the rhythm here and on other songs, as if by design.

On "Ballad of the Left Hand Gun", Vinnie Moore's twanging slides and Rob De Luca's grumbling bass sets up a meaty march in salute of American westerns. As the band keeps the groove tempered to Phil Mogg's lollygagging swills, they meet him at a better median point and the song hums. The spacey keys opening the blues rocker "Sugar Cane" are reminiscent of the old days as the song takes an unhurried trudge to match Phil Mogg's slow drawls. Ditto for the mid-tempo throb of "The Real Deal", which Mogg glues onto charmingly and turns it into a hip-swinging banger of a tune. Mogg saves his most soulful swagger, however, for the blues shakes of "Rolling Rolling".

Part of why Mogg gets away with his lazy intonations on this album is due to his veteran status, but it's largely due to the introspection of his lyrics, which deserve clear, swaying enunciation. As ever, Mogg's a keen observer, and sometimes he plays the unrelenting romantic (i.e. "Precious Cargo", "Messiah of Love" and "The Killing Kind"). The way he utters "come here, my skanky toadie" on "Devil's in the Detail" is smarmy as all-hell. Yet Mogg's affection for a mostly blue collar audience that has been UFO's primary support base gives both his voice and his words a staunch resolve you can't help but feel empathy for.

"A Conspiracy of Stars" kicks a lot of ass on its musical merits alone. Like "The Killing Kind" and "Run Boy Run", "Devil's in the Detail", "King of the Hill" and "The Real Deal" ride some hard-hitting grooves. "Precious Cargo" is both heavy and bluesy and Vinnie Moore's jamming solo spreads are terrific. The Seventies-tapped "One and Only" might've been a sleeper hit back when FOREIGNER first struck gold.

Vinnie Moore is stellar on this album and his energetic performance no doubt gives the rest of the band its thrust. "A Conspiracy of Stars" almost defies logic it should sound this good. Diehards are going to be screaming their guts out for UFO staples such as "Doctor Doctor", "Only You Can Rock Me", "Rock Bottom" and "Lights Out" at future live gigs, but there's no reason they shouldn't be equally excited if UFO plays the blaring "King of the Hill" (listed as a bonus track) from this album.

"A Conspiracy of Stars" never falters and it's telling of UFO's doggedness in modern times that needs this kind of reminder of what damned fine hard rock sounds like.