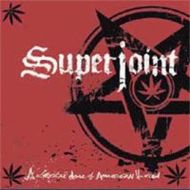 A Lethal Dose Of American Hatred

So it's official: Philip Anselmo has effectively left PANTERA, put DOWN on ice, and more or less dialed down activities with all other musical projects except this one, SUPERJOINT RITUAL. Last year's debut album, "Use Once And Destroy", took eight years to come to fruition as the band flickered in and out of existence. Now that Anselmo is concentrating all his energies on SUPERJOINT, what can we expect from this sophomore release?

The answer is: pretty much more of the same. "A Lethal Dose Of American Hatred" is a relentless and ferocious metallic assault that covers territory somewhere between late-Eighties thrash and all-out old school hardcore, which is where Anselmo and company intend it to stay. It's dark, unforgiving, uncompromising stuff, and on this second release, the band sounds tighter and more focused than on "Use Once..."

There's a barrage of aggressive and fast songs that pummel the ears with the intensity of, if not standard-bearers SLAYER, then certainly vintage ENTOMBED or THE HAUNTED. Tunes like "The Destruction Of A Person" and "The Knife Rises" are doomier, sludgier, and pile some truly sinister and brutal riffs one atop the other that are more distinctive than the material on the first album.

The star here, of course, is Anselmo, whose voice is in fine form whether he's screaming like he's on fire or singing low in that ghostly, burned-out croon of his. Although SUPERJOINT RITUAL features such luminaries as guitarist Jimmy Bower (of DOWN and EYEHATEGOD fame) and bassist Hank Williams III (of, er, Hank Williams fame),the focus is squarely on our boy Philip, who sounds as pissed off and fired up here as he ever has.

Two problems keep SUPERJOINT from being a superb throwback to the kind of metal that many of us have been craving for again during the lean nu-metal years: a rather thin production (guitars don't come across nearly as thick and crunchy as they could),and that pesky little problem of a lack of truly memorable tunes. There's lots of killer metal on "A Lethal Dose", but very few of the songs stick in the mind even after repeated listenings.

It may be that the raging instincts of Philip Anselmo need the technical prowess and dynamic abilities of PANTERA's Dimebag Darrell and Vinnie Paul to create incredible material. But if he sticks to his promise and keeps SUPERJOINT on the frontburner for the next few years (at least until the seemingly inevitable PANTERA reunion),Anselmo could conceivably guide SUPERJOINT into becoming another metal colossus. As it stands, "A Lethal Dose…" is an acceptable — if not great — outlet for the man's seemingly bottomless well of aggression.