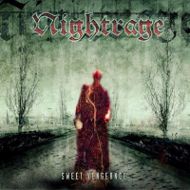 The weekly return of Tomas Lindberg (THE GREAT DECEIVER, LOCK UP, THE CROWN, SKITSYSTEM) in yet another project only ranks just behind death and taxes and night turning into day on the scale of inevitability.

In this particular instance, Tomas lines up alongside a couple of guitarists from Greek bands (ex-EXHUMATION man Mario Iliopoulos and DREAM EVIL player Gus G),French bassist Brice Leclerq, Tom S. Englund of EVERGREY for melodic vocal purposes and Per M. Jensen of THE HAUNTED fame on drums. And people are getting very excited about it. They're hailing "Sweet Vengeance" as the bona fide follow-up to AT THE GATES' "Slaughter Of The Soul" — the classic Lindberg-fronted melodic death metal album that became a hefty yardstick.

Unfortunately, in real terms it isn't quite the second coming of Christ. What it manages to be overall is an above average slab of melodic crunch that can at different points be both skilful and disparate. By default, a song such as "Glow Of The Setting Sun" was always going to be an average one, due to it chugging along in the kind of fashion that "X"-thousand twin axe attacking bands have now made their own. "Elusive Emotion", by contrast, is a much brighter chug-along, with the quality of the musicians involved really coming to the fore as every melodic nicety is positively dripped onto the track. Ditto with "Gloomy Daydreams" that hinges on some lush solo work from the Greek contingent of this international alliance.

Perhaps slightly unfairly, Lindberg appears to attract much of the credit for these project indulgences. Ironically, though, it's those Greek players here who really give the edge to an album that, while pretty good, doesn't quite live up to its revolutionary billing.