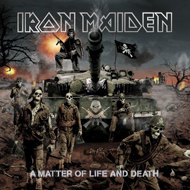 A Matter of Life and Death

Seven out of the ten very long, largely interminable tunes on IRON MAIDEN's 14th studio offering start out with either a gentle, low bass line or a softly strummed guitar. There's nothing wrong with either type of intro, but hearing it over and over again starts to make the listener feel like he's hearing the same song endlessly. It's even worse when that song proceeds to go nowhere for anywhere from five to nine-and-a-half minutes.

IRON MAIDEN has always been one of the most respected and influential bands in heavy metal history, but there's been a decided lack of fire and creativity in their studio work for at least the last decade, even despite the much vaunted 2000 reunion with singer Bruce Dickinson and guitarist Adrian Smith. That absence of energy and freshness has carried over to "A Matter of Life and Death" in a big way, giving it the feel of a record made by a band that's pretty much sticking to an old formula.

Aside from the already mentioned intros, the songs go through the usual MAIDEN paces, with the intro giving way to a mid-paced verse-chorus structure and perhaps a faster bridge somewhere in the middle before the song settles back down for a quiet finale. Unlike much of the band's best older work, however, the songs here never really build to epic choruses or triumphant, electrifying finales — they just sort of peter out. Dickinson rambles on about war or religion or honor or any of the group's regular lyrical concerns (although some of the lyrics on tracks like "For the Greater Good of God" are a bit more melancholy than usual) as the band churns behind him, the always thin-sounding guitars usually competing for space in the mix with Steve Harris's bass. MAIDEN's records have never had a great, heavy, crunchy guitar sound and it's even more astounding now how watery they are with three axemen in the group.

The band does get good marks for maintaining a high standard as players, and despite the always questionable mix, there is a live feel to the recording that is a credit to the musicians' long experience playing together. But while a song like "Brighter Than A Thousand Suns" crackles with a bit more energy and a less forced, smoother-sounding arrangement, most of the other tracks on the CD just seem to go on and on pointlessly, the band stretching the songs as far as they can not because it's necessary, but just because they can.

The last IRON MAIDEN album I enjoyed from start to finish was 1992's "Fear of the Dark", and at this point, at least in the U.S., the group has more or less been relegated to nostalgia status (I remember seeing them on the "Brave New World" tour and all but hearing pins drop as the band uncrated a burdensome six new songs on the audience). Certainly the group's legendary status is well-deserved, and it was nice to see Bruce back with the boys after the Blaze Bayley debacle of the late Nineties. But a band can still be an excellent live attraction without necessarily being able to capture the same magic in the studio, and this is simply a matter than IRON MAIDEN needs to face up to.