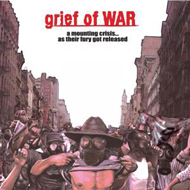 Who knew that the most Germanic of the new wave of retro thrash bands would be from Japan? GRIEF OF WAR at their best are dealing in the kind of skittering, fast-paced, four-on-the-floor thrash that was the province of TANKARD and DEATHROW twenty years ago (though without the former's maniacal edge or the latter's technicality). And while their take on this traditional sound offers little spark of individuality or innovation, there are worse things you could do than spend half an hour with these headbangers.

Things start off in fine style with the excellent, DESTRUCTION-influenced "Hatred Burns" and "Rat Race" â€” plenty of speed, chunky riffs, and snarling vocals. "Sown By Greed" really nosedives, though, with a boring midtempo beginning that plods into a mushy midsection that goes nowhere. "Don't Walk Away" picks up the pace again quite nicely, though â€” excellent guitar work on this track, and some of GRIEF OF WAR's best, meanest riffing.

The problem with GRIEF OF WAR is that they're not able to sustain the excitement for more than one song â€” or, in some cases, one part â€” "Eternal Curse" has a few decent moments trapped in a morass of dull riffing and pedestrian metal. Even at their best, they're not doing anything that reaches out of the stereo and grabs you by the throat, so when they spend time on filler, it's easy for attention to wander. No one's asking the band to reinvent the wheel, but you have to do better than half-assed DESTRUCTION worship (see "Blind From the Facts") to cut through the glut of new-school thrash bands and make a record worth people's time and money.

GRIEF OF WAR aren't a bad band at all, and with time they could evolve into something truly lethal. But they commit one of the worst sins a thrash band can commit â€“ they get boring. The good moments on "A Mounting Crisisâ€¦" are very good, but they're just not enough to recommend this album for anyone but the least discriminating thrashers. Download a few tracks, then spend the next year peering at your iPod screen thinking "is this VENDETTA?" every time they pop up in your shuffle.