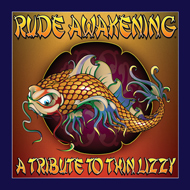 A Tribute to Thin Lizzy

Apparently (if you believe the press releases),Hollywood's RUDE AWAKENING has received some level of acclaim for its brand of hard rock/power metal. As of late, the band has been playing a series of THIN LIZZY revival/tribute shows, and that's a worthy endeavor. Heck, I'd attend a THIN LIZZY tribute show. But to release an album made up entirely of THIN LIZZY covers, I'm not so sure.

On the upside, the group does a fine job of recreating classics like "Jailbreak", "Wild One", and "Cowboy Song", although something seems slightly amiss on "Boys are Back in Town". Guitarists Bill Sablan and John "Gumby" Goodwin bring the hot licks and reproduce the work of guitarists like Scott Gorham and Brian Robertson quite well. Though the voice of the late Phil Lynott is nearly impossible to recreate, RUDE AWAKENING vocalist Mitch Urban does a pretty good job and has obviously spent some time working on inflection and all the little things that made the Irishman a giant of a front man. The intent of "A Tribute to Thin Lizzy" is of course not to experiment or re-arrange the originals, but to the stick to the songs as they were written. If that's not what you want out of a tribute album, then stay away from this one.

What it comes down to is that listening to "A Tribute to Thin Lizzy" is not a chore. I mean, come on, these are some of the greatest rock songs ever written, and unless a tribute band completely butchers them it's rather difficult not to find some measure of enjoyment in them. But the fact of the matter is that purchasing a THIN LIZZY "best-of" collection would make a hell of a lot more sense. If you're a hardcore THIN LIZZY fan, then you'd probably want this one in your collection too, as you've probably got everything else even remotely related to the legendary group. As for a rating, it seems rather pointless in this case, so take it with a grain of salt. It's a pretty simple decision. Either you love tribute albums and/or you're a diehard fan of THIN LIZZY or you're not. Based on a sentiment that says "sure this sounds fine, but why would you buy it?" I've got to split this one right down the middle.