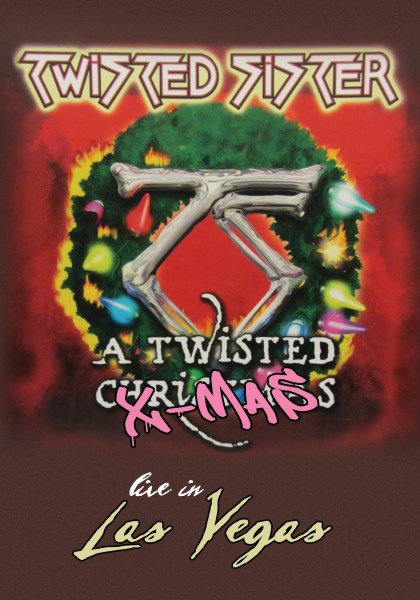 A Twisted Xmas: Live in Vegas

God bless TWISTED SISTER, everyone. As Jay Jay French quips in "A Twisted Xmas: Live in Vegas", you're not getting the TRANS-SIBERIAN ORCHESTRA, you're getting the "Transvestite Orchestra".

It's these little jokey snippets of silver and a fair chunk of theatrical gold that gives TWISTED SISTER the excuse to peddle a second DVD of their annual yuletide bash that began after the success of "A Twisted Christmas" back in 2006. Otherwise, you'd have to be a little offended anyone would have the stones to push what is essentially the same product twice.

"A Twisted Xmas: Live in Vegas" versus "A Twisted Christmas Live" from 2007 has just about the exact same set list minus the trade for a pint-raising, Celtic-touched hike of "Deck the Halls" on the new release in place of "The Fire Still Burns" from the 2007 concert. Otherwise, the set list is virtually replicated outside of a slightly different sequential order between the two. In other words, you can expect TWISTED's rowdy rips on "Have Yourself a Merry Little Christmas", "Silver Bells", "O Come All Ye Faithful", "I Saw Mommy Kissing Santa Claus", "White Christmas" and their always-hysterical "Heavy Metal Christmas (The Twelve Days of Christmas)". In the latter case, TWISTED SISTER rolls out the life-sized statue of Ozzy Osbourne during the song. All mingled with TWISTED staples such as "Shoot 'Em Down", "The Price", "Burn in Hell", "You Can't Stop Rock 'n Roll", "I Wanna Rock" and "We're Not Gonna Take It". Hey guys, next time, let's belt "Come Out and Play", in keeping with the situation, as it were.

So why bother with "A Twisted Xmas: Live in Vegas?" It could be argued that the newer DVD has a sharper contrast, much less a more expansive stage drop and TWISTED SISTER's road crew dressed as elves. The S M Elves sweep up the paper snowflakes off the stage on song breaks while Dee Snider cracks jokes and A.J. Pero (it's suggested later in the set) attempts to skewer them with his drumsticks. Then there's the butt-flaunting "reindeer" hauling the caked-up Snider in a Santa suit at the beginning of the set. Really, the best reason to have another go with TWISTED SISTER's holiday shindig outside of being there is because they sound really damned good here, even better than the same unit (all five original members strong) fielding "A Twisted Christmas Live".

Unfortunately, an amusing skit entitled "Satan Claus" gets exhausted in a hurry. While it's a gas to see a red-mohawked devilish gift-giver yank out the gigantic prop drumsticks from "The Price" video as an onstage gift for A.J. Pero, that would've been sufficient enough. If you were in attendance at this show in Las Vegas, it was probably a hoot all the way through, particularly with a rather convincing KID ROCK impersonator at the tail end of this prolonged bit. You can safely assume the whole thing is a set-up for "I Wanna Rock", and at least the motive is effective for the crowd, since they rabidly roar "Rock!" back at Dee Snider, who, as ever, masterfully coaxes their every scream throughout the show.

Dee's pipes remain at full proficiency and you still wonder how a heavy metal mogul manages to croon Christmas carols with substantial sweetness. Mark "The Animal" Mendoza really needs his own private gap on stage left since anyone coming with his perpendicular bass smashes are likely to get a black eye in transit. Jay Jay French, the behind-the-scenes ops man of the TWISTED SISTER parade, has fun poking at his Jewish heritage while peeling off some blistering solos. It's a New York thing, but the joke runs its course one too many times in the set. No one in the audience seems to care, although they seem genuinely surprised to hear Dee Snider inform them he's not really Jewish. Eddie "Fingers" Ojeda hangs tough, considering he reportedly had back surgery only weeks before the gig. Then you have A.J. Pero, said during the set to have been in tremendous pain himself leading up to game time. You wouldn't know it, because the man pulverizes the kit with gruesome tenacity. A cool bonus is the green and red light lasers that glaze off of his sticks once the stage lights vanish during his drum solo.

So it's up to you to decide if all of this is enough to take a second ride through what is becoming a quasi-second career for TWISTED SISTER. You just get the feeling "A Twisted Christmas 3-D" isn't far around the corner.