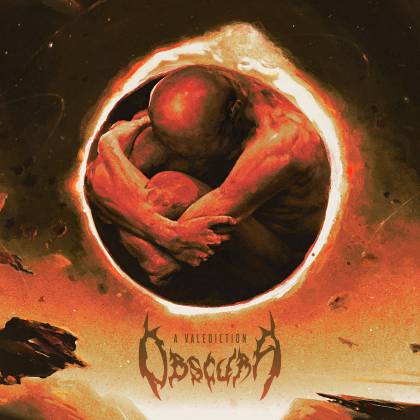 When you consider who the men behind OBSCURA are at this point, it almost seems unfair to everybody else. Steffen Kummerer (also a member of THULCANDRA),Jeroen Paul Thesseling, Christian Münzner (also in ALKALOID, ETERNITY'S END and PARADOX) and David Diepold (see also COGNIZANCE) are, simply and undeniably, four of the greatest virtuoso musicians the metal scene has to offer. Kummerer has been there from the start, of course, and it was his initial vision that proved so effective and unique on the band's summer 2006 debut album "Retribution". Fifteen years later, OBSCURA have undergone a prolonged and endlessly fascinating evolution, taking them from the supreme-level progressive death of "Cosmogenesis" (2009) and "Omnivium" (2011) to the increasingly exploratory brutality of "Akróasis" (2016) and "Diluvium" (2018); the last of which seemed to herald a renewed focus in the OBSCURA camp, at least in terms of songwriting. Quite what transpired between then and now is probably irrelevant, because now Kummerer has surrounded himself with an even more potent and skillful ensemble here, and "A Valediction" is another clear and bold leap forward into uncharted territory.

The biggest shift here is that OBSCURA have refined their music to the point where complexity and melody coexist. The result is 11 songs that, on the surface, seem simpler and more direct than anything the band have done in the past. Underneath that surface, of course, the absurd technical skill that all four men possess is permanently on show. Whether this advancement will delight every diehard fan is open to debate — we are unquestionably a long way away from NECROPHAGIST's "Epitaph" — but songs like epic opener "Forsaken" and shiny death metal barrage "When Stars Collide" are accessible and memorable, while remaining true to their creators' brutal but imaginative ethos.

If artistic progress sets off your poser alarm, recent single "Devoured Usurper" is at hand to reassure. If there has been a more effective mutilation of MORBID ANGEL's mighty mid-'90s template in recent times, we demand to hear it immediately. OBSCURA are known to be elite death metal performers, but even by their past standards, "Devoured Usurper" is an imperious, magnificent thing. Rapacious and unrelenting, "The Neuromancer" is more red meat for the deathly hordes, but as with everything here, Kemmerer's crew are locked in a state of collective fluidity: riffs glide across blastbeats, with every layer crystal clear, and OBSCURA spiral away toward instrumental nirvana, treacly fretless bass and machine-gun riffing in perfect synch.

Despite those thrilling moments of all-out war, "A Valediction" will perhaps be celebrated more for its succinctness and melodic charms. Best exemplified by the symphonic battery and romantic hooks of the closing "Heritage", which blurs the line between tech-death and melo-death with laudable finesse, an electrifying display of greatness.