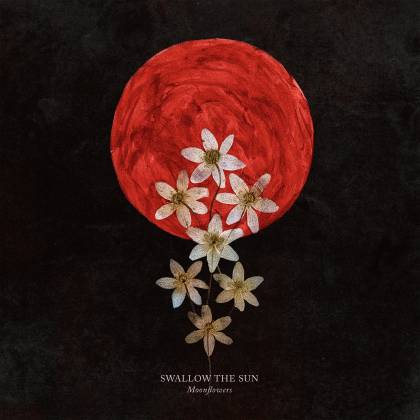 Described by the band's creative mastermind Juha Raivio as "a mirror of a deep self-disappointment", "Moonflowers" is an album with sorrow and dismay at its very core. That will not come as a huge surprise to fans of SWALLOW THE SUN, as the Finnish band have long established themselves as the finest exponents of crestfallen heaviness around, with a catalogue full of songs seemingly designed to tear hearts out and stamp on them in majestic slow motion. This one is different, however. It hurts more. Created during lockdown, "Moonflowers" takes Raivio's introspective approach to new levels of agonizing vulnerability, and at times the very real nature of the songwriter's disquiet is genuinely difficult to listen to. But for all its heart-rending rawness, SWALLOW THE SUN's eighth full-length album is also one of their most beautiful.

The opening title track is wonderfully elegant and melodic, and while there is nothing wistful or otherworldly about its atmosphere, the sheer stately power of the Finns' performance creates a stirring momentum of its own. Recent single "Enemy" is a morbid gem, with a lethally effective chorus that you might want to avoid if you're having a bad day, but with great ensemble lightness of touch on display, particularly during its none-more-goth midsection. Frontman Mikko Kotamaki has never sounded more lost in the moment, and he remains a superbly skilled mouthpiece for Raivio's innermost thoughts. His effortless transitions from ghostly melody to barbarous roar are more effective than ever on sprawling epics like "Woven into Sorrow" and the rugged shapeshifting of "Keep Your Heart Safe from Me". He has also discovered the perfect foil: on the dynamic shadow play of "All Hallows' Grieve", OCEANS OF SLUMBER's Cammie Gilbert creates her own serene space amid the bereft melee, to deliver a truly mesmerizing cameo, as if she had always been there.

The final three songs are among the finest SWALLOW THE SUN have committed to tape, and yet the gently oppressive weight of Juha Raivio's gloom persists. The result is simultaneously devastating and irresistible. "The Void" is a magnificently glacial thing, with dreamy, goth rock ambience and several visceral, overdriven crescendos; "The Fight of Your Life" is the band at their most fervently progressive, as acoustic reverie gives way to murderous doom metal colossus and back again; "This House Has No Name" erupts with seething black metal intensity, delivering a final kick to the kidneys before all hope is abandoned and the post-mortem on this mortal realm begins. Again, this is fantastic, evocative and richly conceived music, but its broken and battered heart tells a story that not everyone will want to spend too much time with. But if you've stuck with SWALLOW THE SUN up until this point, you may consider yourselves forewarned and possibly even forearmed. Just don't be surprised if "Moonflowers" actually fucking breaks you.