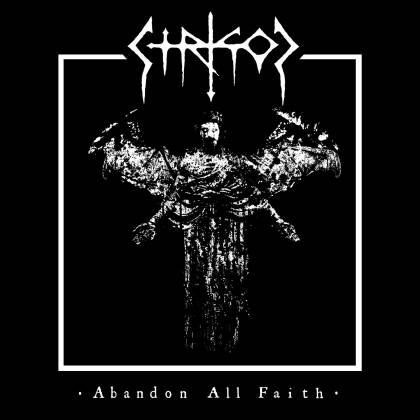 Greg Mackintosh is not happy. And thank Satan for that. Over the last three decades, the PARADISE LOST guitarist has been involved in a huge number of seminal and ground-breaking metal records, from early PL classics like "Gothic" and "Draconian Times" through to three uniformly astonishing albums with crusty death metal project VALLENFYRE. In truth, STRIGOI seldom sound too far removed from his most recent band's strain of pitch-black extremity, but Mackintosh is chasing a different monster here, once again aided by bassist Chris Casket (VALLENFYRE/EXTREME NOISE TERROR) but otherwise fully in control of every gruesome element. Death metal remains the spiritual core of everything that Mackintosh does, but STRIGOI immediately feels less morose and more bug-eyed and bestial than its predecessor, with plenty of wild detours into neck-snapping D-beat, bursts of bilious, industrial sludge worthy of early SWANS and some of the most scabrous, abyssal heaviness unearthed this year.

It's obvious from intro "The Rising Horde" — 90 seconds of mounting tension and unearthly noise — that "Abandon All Faith" is an endeavor driven by disdain, disgust and an overpowering sense of futility in the face of humanity's failures. This is unrelenting, uncompromising and warped beyond all recognition; the mostly straightforward clatter of "Seven Crowns" and "Phantoms" coming across as a sickened, mutant version of something more familiar, dense with menace and played with desperate intensity. "Throne Of Disgrace" is one of several overtly old-school moments: a burst of Stockholm-powered turbo-death with multiple stops, starts and blasts, it's done and dusted in less than two minutes, and yet its atmosphere lingers like some spectral threat. Similarly, "Scorn Of The Father" is a lurching barrage of serrated-edge chug and heads-down ripping. It's superficially traditional, but there is something nasty and malevolent lurking just beneath the surface of every riff and pained bellow.

The finest moments come when Mackintosh whacks the misery fader right up into the red: both "Carved Into The Skin" and the closing title track wallow in a festering soup of slow-motion spite, providing thrilling contrast with the album's more ferocious bursts of speed and cementing the impression that British metal's master of morbidity is incapable of making a bad record. Abandon all faith, by all means, but you can definitely put your trust in STRIGOI.