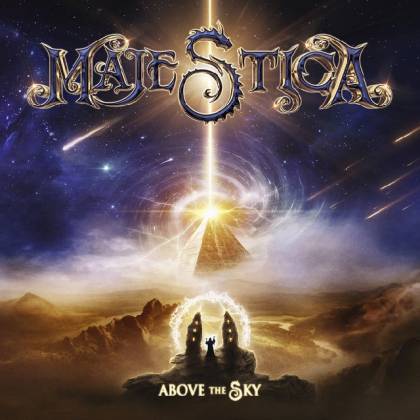 As much as we should avoid judging books by their covers, it seems reasonable to note that "Above The Sky" gives every indication that it will be a preposterous and overblown power metal record, quite possibly with a few progressive touches thrown in. The artwork, the band name, a lingering sense that someone involved has probably spent far too long reading Tolkien... yes, we're firmly in explosive, melodramatic pomp metal territory and that should make it pretty easy for most metalheads to decipher whether they are likely to engage with this or not.

Led by vocalist/guitarist Tommy Johansson, arguably better known as a member of SABATON, MAJESTICA are a new name, but an old band: as REINXEED, the Swedes have released six-studio albums since 2008 and, significantly, the third one was called "Majestic". As a result, "Above The Sky" is very obviously intended to be a new start for Johansson and his loyal comrades, guitarist Alex Oriz and bassist Chris David, albeit a new start that is more about enhancement and expansion than any kind of wholesale evolution. The opening title track nails the band's revived formula across six breathless minutes. In terms of verses and choruses, this is textbook European power metal, but there are countless deft touches, structural detours and moments of proggy abandon crammed in between the slick melodies, which means that MAJESTICA at times sound almost as much like DREAM THEATER as they do like HELLOWEEN. Again, you will instantly know if that's an appealing idea or not.

Ultimately, MAJESTICA are a ridiculous amount of hyper-cinematic AOR speed metal fun. Some of the musicianship on display is absurd, of course — check out the brilliant moment in the title track when trumpets parp over Chris David's insane bass solo — but Johansson's instinct is always to maximize the uplifting entertainment potential that the best power metal has in plentiful supply. With that in mind, shorter, punchier anthems like "The Rat Pack" and "The Legend" feel a little less substantial and satisfying than the more adventurous and multi-faceted likes of the superbly titled, eight-minute "Mötley True" and grand but sentimental crescendo "Alliance Forever". MAJESTICA are at their most compelling when there are compositional kitchen sinks bouncing off the walls, but they also have a winning way with big, dumb AOR melodies: "Night Call Girl", in particular, is as refined and insidious as any FOREIGNER or JOURNEY smash from back in the day.

It doesn't all hit the target: "Father Time" is one of those mildly excruciating attempts at wacky humor that power metal bands have always indulged in. Ignoring the goofy lyrics, it's a decent song with a ton of muscular energy, but "Above The Sky" was ludicrous enough without knowing winks to the crowd. Listen to "The Way To Redemption" instead: an exhilarating blur of double-kicks and nimble-fingered histrionics, marrying DRAGONFORCE's heads-down intensity to more of those prog-tinged swerves and flips, a slightly darker edge suiting MAJESTICA's ensemble squall perfectly.

It's not always that easy to distinguish one power metal band from another, but while "Above The Sky" certainly ticks all the usual boxes, it also offers plenty of freshness, vitality and even the occasional flash of subversion. The tunes are massive, the musicians are irritatingly proficient and the whole thing comes across as a superior and distinctive effort in a crowded marketplace. Most DARKTHRONE fans would fucking hate it, though. Just to confirm.