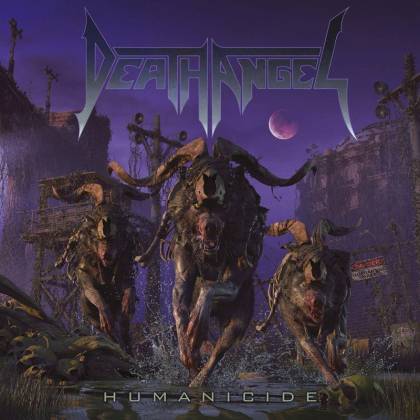 San Francisco Bay Area thrash metal legends DEATH ANGEL were firing on all cylinders in the late eighties. Their talent was abundant and simply undeniable. Their songwriting was thoughtful and memorable. It seemed as though the world was their oyster. But nagging legal woes and a near-fatal tour bus crash derailed the band's forward momentum. They were poised to have the coveted opening slot of the infamous "Clash Of The Titans", which featured MEGADETH, SLAYER and ANTHRAX, but due to then drummer Andy Galeon's serious injuries related to the crash, requiring extensive recovery time, they were unable to perform, making way for ALICE IN CHAINS. What's more, they had to ultimately cancel an offer to, alongside ANNIHILATOR, open for metal gods JUDAS PRIEST on the European "Painkiller" tour. But, again, they had to cancel due to the bus collision's impact, eventually being replaced by PANTERA.

The aforementioned cancelations aren't simply relevant because of the magnitude of those tours. The opening bands that replaced them capitalized on those opportunities, which ended up being pivotal moments, ones that that helped catapult them toward considerable commercial success. DEATH ANGEL broke up in 1991. Its members subsequently went on to form the funk metal/alt rock band THE ORGANIZATION, as well as the hard rock ensemble SWARM. DEATH ANGEL reunited properly a decade following the break-up, and though the momentum of its early career was long lost, and the material hasn't quite reached the high watermarks of "The Ultra-Violence", "Frolic Through the Park", and "Act III", the Californians have consistently offered solid, hard rock-tinged thrash metal that doesn't deny its roots without being afraid to branch out and grow.

The San Francisco thrashers have returned with their ninth album: "Humanicide", an effort that bridges the gap between classic thrash and heavy metal, along with a distinctly modern take on metal, which has the potential to appeal to music lovers far beyond thrash metal's scope. The title track exemplifies all of this to a T, as it starts things off with soothing NWOBHM guitar harmonies, followed by a potent old-school thrash attack repurposed into the modern-metal era. Mark Osegueda's vocals overflow with charm, venom and passion. The regular hard rock inflection of his voice, which has improved over time, lends itself toward the band's considerable sense of accessibility.

With "Divine Defector", DEATH ANGEL ups the ante in the aggression department with blast beats and frantic riffing. "Aggressor", meanwhile, exhibits a punchy thrash aesthetic with more modern string sounds and flavorful prog-inclined guitar work. Midway through the incredibly dynamic song, flamenco guitar work—encompassing pseudo-Middle Eastern qualities—emerges before the song returns to a contemporary crunch as well as timeless thrash. Elsewhere, "I Came For Blood" is a more one-dimensional but thoroughly satisfying and gnarly punk-fueled number.

"Humanicide" isn't perfect. The latter half isn't quite as captivating; yet, even there, it's filled with enough tasteful work to maintain one's attention throughout. And it's a mystery as to why they don't incorporate some of the nastier riffs that were commonplace during the band's early years. Then again, it makes sense considering that the band isn't afraid of exploring music as they grow with age as individuals. And to their credit, they haven't abandoned that thrashing core by any means. Among the excitement of musicians half their age, the band remains playful with music. Sure, we can speculate about the possibility that they could have been the next big thing had they never broken up, but whatever the case may be, "Humanicide" proves that DEATH ANGEL continues to be an incredible thrash metal band that's exponentially more interesting and enjoyable than MUNICIPAL WASTE.